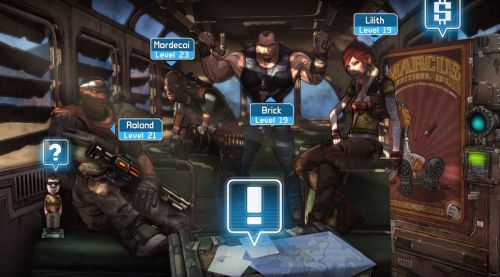 Today we have a little news for Borderlands 2 and big news for a new iOS game in the shoot and loot franchise. First up, Borderlands 2 received a patch that should fix several minor to major issues that have popped up since the latest DLC went live.

It appears "Captain Scarlett and Her Pirate's Booty" caused some connectivity issues with players. The patch also takes care of some other quest blockers and annoyances. I think the only problem I've run into is the occasional Pangolin shield that doesn't tell me how much of my health it will eat. Check out the list after the break to see what's been fixed.

• Fixed player first-person arms appearing too far up or down the screen when in horizontal/vertical split mode.

• Fixed players losing ammo when reloading a savegame with max ammo and a stockpile relic equipped.

• Fixed the vendor UI sometimes showing a count of 1 less item in the player's backpack than is actually there.

• Fixed players getting stuck in a white box when two people try to travel at once and one is in a vehicle.

• Added safeguards against the game getting stuck on a 'Saving...' prompt when a client with a splitscreen player saves and quits the game under specific rare circumstances.

• Fixed the "has abandoned your struggle!" message sometimes appearing with no player name.

• Fixed mini-map fog-of-war sometimes not uncovering correctly when first loading a saved game as a client.

• Fixed an error that could sometimes occur when trying to join a game where the host had recently returned from a downloadable content area.

• Fixed a blocker in the "Do No Harm" mission and repaired users already affected by the bug.

• Fixed an issue with savegames sometimes causing the game to stutter / freeze and repaired saves already affected by the bug.

• Made the user's inventory not jump to the top of the list when using a customization item.

• Fixed a bug with shields that reduce the player's maximum health not displaying the amount of health reduced on the item card.

• Fixed a bug where some challenges would sometimes re-complete levels 1 through 5 over and over again, granting the user additional ranks and tokens.

• Enemies affected by a Siren's Thoughtlock ability may now be damaged by other players.

• Fixed an issue where players could sometimes lose their third and fourth weapon slots. Characters who have already lost these slots will be repaired the next time they are loaded.

• Fixed an issue where players were sometimes unable to pick items up after another player had bulk-picked-up a nearby item.

• Fixed an issue where players could occasionally be unable to connect to one another if one of them had recently been in DLC that the other doesn't have. In sad but cool news, Entertainment Weekly has the details on a new iOS game called Borderlands Legends. Gamers will once again take on the roles of the original Vault Hunters; Roland, Lilith, Brick, and Mordecai. The game will offer a top down perspective. It appears to be more strategy than shooter.

I've searched high and low, (well, from this tab to that tab), and I can't find any indication that this will be a co-op game. The EW article states: "In a neat twist, players control all four characters simultaneously and can temporarily coordinate their corpse-piling talents to unleash powerful attacks." That "neat twist" screams SINGLE PLAYER to me. Oh well. We contacted 2K to clarify whether or not Borderlands Legends would support co-op and have yet to hear back.

The big outlets will have a more in-depth look later this week. If Borderlands Legends does indeed have co-op, you can be sure we'll cover it.