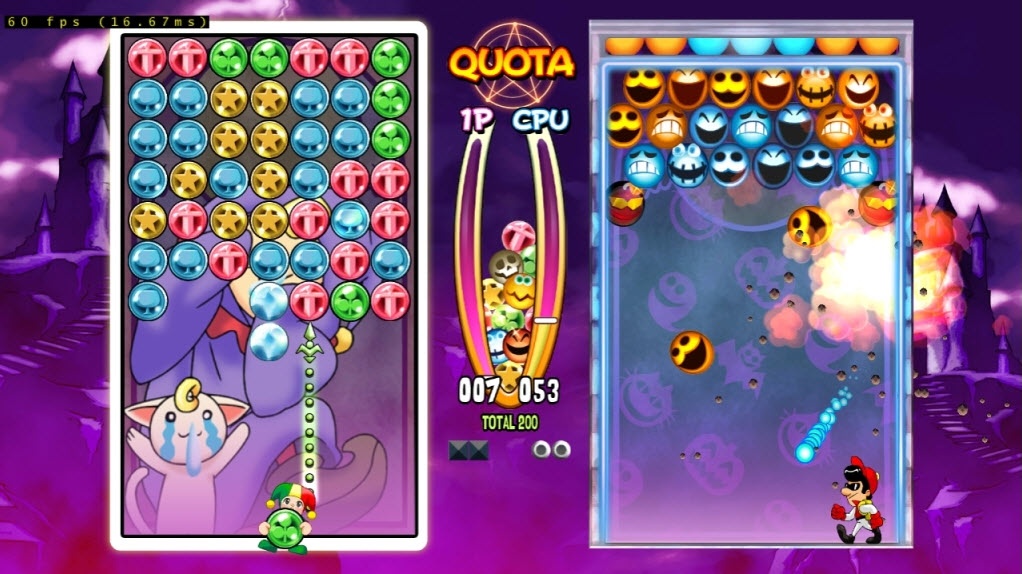 The Magical Drop series may not be very well known in North America, where only a few games have been released. But in Japan, it was a proud series that ran from 1995 all the way up until creator Data East went out of business. G-Mode bought it up (along with Bad Dudes and other IPs) and produced Magical Drop Touch for iOS and Android. Several years later, the new HD sequel Magical Drop V comes from French developer Golgoth Studio (makers of the long-delayed Toki Remake) and publisher UTV Ignition. For the first time in the series (that we know of), this one even has co-op play!

Magical Drop V plays much like Puzzle Bobble/Bust-a-Move, although characters can actually move side to side instead of aiming from a stationary position. Speaking of the characters, large animated versions of them react in the background while playing. It's a cool effect, though  the number of animation frames in part V could be better (a problem that afflicts Toki Remake too).

The Magical Drop V trailer promises several multiplayer modes, including Team Battle, in which 2 sets of 2 players compete against each other. Co-op mode works the same way: 2 human players share the same puzzle field while playing against against an AI team. Other modes like Tournament, Survival, and King of the Hill are mentioned, one of which has 4-players fighting in their own fields much like the what we've seen in the recent Puyo Puyo/Puyo Pop games. At least some multiplayer modes will be online, though we're not sure about co-op yet.

Magical Drop V is due out on November 15 for Steam. The XBLA and PSN versions don't have a specific release date yet, but we'll keep you posted. In the meantime, you can grab the full soundtrack for free from Golgoth's website. The download kept cutting off early for me, but hopefully others will have better luck.