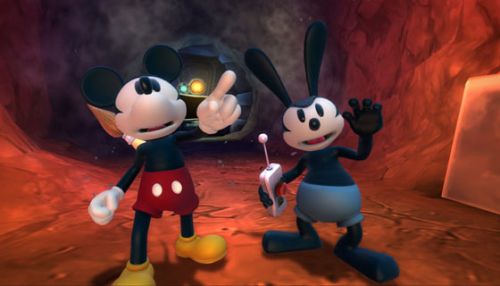 Watch a small clip of Epic Mickey 2: The Power of Two’s co-op gameplay, as Disney Interactive members decided to give us a behind the scenes look at the story aspects of game development. What does it take to make a wonderful looking game with two, colorful, co-op characters in Mickey and Oswald? Obviously, the many talents of an experienced, comic book professional.

Marv Wolfman, the Editor-in-Chief of Marvel Comics for a time, helping kick the Disney Adventures magazine off the ground back in its hay-day, is a major writing consultant for the game’s storyline. Obviously, his years of cartoon writing experience have helped pave the way for Epic Mickey 2’s chance at gaming greatness, storyline-wise. Take a minute of your time and check it out some new scenes of side-scrolling, co-op play:

How Wolfman decided to write the storyline for this game is very thoughtful of the co-op element itself. This game features not one, but two main characters who share an equal role in the quest. To make them work together effectively, not just through gameplay mechanics, he had to write the story as more of a long, in-game conversation between these two Disney icons (similar to a Left 4 Dead). Whichever way you choose to play Epic Mickey 2, whether it’d be alone or with a friend (we certainly hope you bring a friend along), this game will tell a unique, but classic Disney story that you’ll get to experience in a total different way than you did from the original.

Disney’s Epic Mickey 2: The Power of Two releases this November 18th on all major platforms.