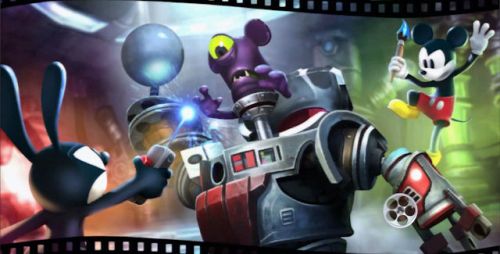 Remember when we said that we’d be done showing off Epic Mickey 2: The Power of Two trailers? Well, we were just pulling your chain there. Take one more look at what this game can offer for your co-op gaming life.

This final (hopefully) launch trailer sums up practically everything we’ve been discussing on here for months in less than one minute. In a nutshell, Mickey and Oswald team up on a magical, musical adventure for the first time, each one has their own special powers meant to traverse The Wasteland, and other unique power-ups will be available along the way. Drop-in, drop-out co-op is also a key feature in Epic Mickey Two, allowing anyone to just as easily pick up a controller and join in the fun, or exit the game without disrupting the other player's experience. Join up with a friend with the addition of the Wii and 3DS versions, recently released in retail, it might be worth your while to look into this platformer for a solid, co-op title in your newly budding Nintendo library.

Epic Mickey 2: The Power of Two is now available in stores for the Wii U, Wii, Nintendo 3DS, Xbox 360, and PlayStation 3