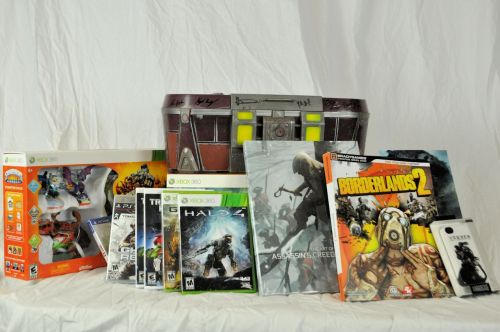 The Child's Play Charity, created by Mike and Jerry of Penny-Arcade, has been something I've personally supported since it's inception.  Like Extra-Life, it's a charity drive that's used to benefit sick children and children's hospitals around the world.  Child's Play has grown from humble beginnings of toy donations to an epic undertaking collecting toys and money for over 70 hospitals worldwide in an effort to give these children an amazing holiday.  Last year Child's Play raised over 3.5 million dollars.  That hopefully brought a lot of smiles.

With that Co-Optimus would like to officially join the cause.  The way we're doing that is with a raffle drive.  Our goal is to raise $2000 while also giving those who donated their chance at some sweet prizes.  For every $5 donated through our official Chip-In widget, you'll earn one chance at winning a prize.  Here's our current list of prizes, which we hope will grow over the next three weeks until the drive ends on December 7th, 2012.  So be sure to check back often and see how the list grows!

*Note* - Due to problems with ChipIn - use the above link to donate and tracked.  Previous donations are NOT lost.  Thanks!

Obviously the big exclusive prize is the signed Loot Chest Edition of Borderlands 2 by Gearbox.  I can't thank them enough for taking the time to sign the item for us to give away.  If you are interested in contributed a prize to our raffle, please contact me at npuleo@co-optimus.com. For every $5 donated via the Chip-In Widget above, you'll automatically be entered for one chance at a prize.  Winners will be drawn in succession, with each winner allowed to choose a prize from the remaining pool of prizes.   All donations received after December 7th, 2012 at 12:00 EDT will not be eligible for a prize.  We will begin drawing winners on December 8th, 2012 and continue drawing winners until all prizes have been claimed.  All proceeds of this raffle are going to be contributed directly to the Child's Play Charity.