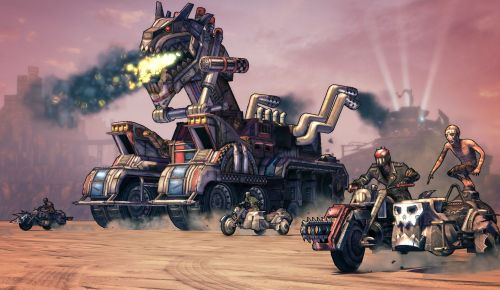 Borderlands 2 dropped some more DLC love on us before the holiday break. "Mr. Torgue’s Campaign of Carnage" is the second story add-on for the addictive shooter-looter franchise. It blasts onto the scene amidst some of the biggest launches of the year. Does Mr. Torgue have enough explosive charisma to distract veteran Vault Hunters from Black Ops 2 and Halo 4? Yes. Briefly.

"Mr. Torgue’s Campaign of Carnage" is similar to the previous story DLC, “Captain Scarlett and Her Pirate’s Booty:” A new character in a new area has new missions to give out for new loot rewards. It’s simple, and it works. Mr. Torgue is a much more entertaining character than Captain Scarlett. He has a rather aggressive personality and an affinity for explosions. He doesn’t really speak English - it’s more as if he communicates through testosterone fueled screams, mouthed guitar noises, and explosions. He sounds remarkably similar to my own inner monolog about seven beers into an evening.

The "Campaign of Carnage" takes place at the Badass Crater of Badassitude. Why wouldn’t it? Is anyone sick of Gearbox’s gratuitous use of the word “badass?” Didn’t think so. As badass as the Badass Crater of Badassitude is, it’s rather small. The entire area in this new DLC seems to be about half the size of Captain Scarlett’s Oasis and outlying regions. I didn’t pace it out or anything, it just seems like a much more confined space. There’s a small raceway and a few other sub-areas, and they are also on the runty side. Once again, the action is set  in a barren wasteland. Come on, Gearbox! You used the color green in the core game. I know you can do it! Oh well. There’s still a lot of stuff to kill. There are Bikers, Loaders, and plenty of Badasses. The Fast Travel system is thankfully in place, but the kiosks aren't located in the most convenient areas, especially for farming.

The story is your standard Bloodsport/Highlander/Karate Kid/Thunderdome/Harry Potter and the Goblet of Fire tournament plot. You enter the arena ranked as the number 50 badass on Pandora. You’ll take part in a tournament where the victor must battle his or her way to the top of the heap and be crowned the number one badass on the planet. The reward? The opening of yet another Vault. Awesome! 50 battles? I’m down for that! Unfortunately, no. There are maybe a half dozen critical missions which can be finished in an hour or two. Don’t fret, there’s more to life than critical paths.

The real reward of this DLC comes in the form of Torgue Tokens. This new currency can be spent at the Torgue vending machines located throughout the region. These machines always have an orange rarity “Item of the Day,” as well as the DLC-specific skins and heads for the Vault Hunters. (Zer0’s is the badassest, in my humble opinion.) I love the content-specific vending machines and currency, and I hope Gearbox keeps it up in the future. How does one acquire these Torgue Tokens? By completing the story missions, obviously, and also by farming the ever-loving-crap out of a number of repeatable missions.. There are a handful of tiered missions that will reward players with a set amount of Torgue Tokens. These missions range from shooting things in a bar, to shooting things in an arena, to shooting things in a junkyard... you get the idea. Vault Hunters eager for orange rarity items will spend a lot of time on these side quests. The only downside is that the Torgue machines seem to offer only Torgue weapons, so if you’re not into explosions, you’re out of luck.

These higher tiered missions should only be attempted by high level players. And I don’t mean level 34 players on Playthrough One. Don’t show up to a Tier 3 rumble without a level 50 character and some friends. Co-op those suckas! (They’re manageable solo, but if you’re still playing Borderlands 2 solo, you’re dead inside.)

Overall, this is another fine piece of downloadable content for Borderlands 2. The story is entertaining, the side missions are silly, and loot farmers will have plenty of harvesting to do. There’s also another "Invincible" raid boss for players who like to shoot things a million times. My two biggest complaints come from the length of the campaign and the lack of a level cap increase. Mr. Torgue is an awesome new addition to the Borderlands cast, and his character is almost worth the price of admission alone. Add in the Torgue vending machines and repeatable missions, and you have yourself a winner.  If you’re down for grinding, (I know I always am), you’ll find plenty to do here. Just be sure to bring some friends.