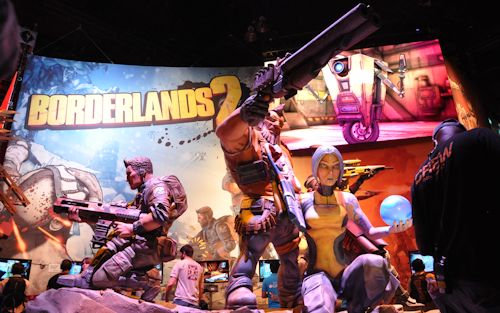 Three of us played Borderlands 2 at E3 2012.  Mike and I managed a co-op session together, with myself as the Commando while he tried out the Assassin.  Andrew checked out the Gunzerker a little later on.  Here's our impressions of the mission that was demoed and the classes we chose.

The mission was quite a bit different from what we've seen in the past in Borderlands, players were supposed to deface several statues of the game's lead villain, Handsome Jack.  Turns out though, the statues are guarded with shields.  What's a vault hunter to do?  How about hack a giant robot that has a laser?

After locating said robot, the mission turns a bit into an escort style affair where you can't let the robot fall below a certain amount of health as he's lasering off the legs of the Jack statues.  Mike and I actually failed this our first time through, but restarted quickly and still managed to beat the mission before anyone else in the room. The Commando seemed pretty run of the mill to be honest, nothing stood out at me as anything super special.  That said, the commando seems like an obvious choice for soloing the game with his abilities focused on health and damage.  For the co-op play through I pumped some points in my turret ability as well as some shielding abilities.  One of them allows you to regenerate health quickly when your shields are full - something I found very useful.  The three skill trees seemed to be focus on how you approach combat - with a defensive skill tree, sniping/long range skill tree, and a balanced one all present.  While I wasn't able to check out how the upgrades performed, it looks like you can somewhat customize your turret ability.

Overall the Commando feels like a souped up Soldier class from the original game.  He has the tools to make soloing easier and for co-op he's going to be an excellent support character, drawing enemy fire and dealing a lot of damage.

Mike here. Since Mordecai was one of my favorite characters in the original game, I fired up the demo as Zero, the mysterious Assassin. Though originally geared out as a sniper, I chose to pump my skill points into Zero's melee tree and equip him with an SMG and a shotgun. Since we were playing co-op, I made sure to take on the skill that causes all of his melee strikes to debuff an enemy for a few seconds, causing them to take 25% more damage.

Zero's signature ability, called Deception, causes him to cloak & spawn four holographic versions of himself to distract enemies while you get yourself into a better position. Since I went down the melee tree, I'd fire it off then maneuver over to the most annoying target and strike from behind for a good damage boost. The debuff that gets applied allowed me and Nick to take down targets much quicker than we would normally. It's nice to see that the class abilities in Borderlands 2 seem to assist in co-op play a lot more than in the prior game. I finally got my hands on the dual-wielding Gunzerker, Salvador. Like the other characters, he has three skill trees: Gun Lust, Rampage, and Brawn. These make up a tasty ballistic trinity of ingredients for a Cubninja cocktail. Gun Lust adds an assortment of damage bonuses. Rampage affects the "Gunzerking" (dual-wielding) ability cooldown. Finally, Brawn increases Salvador's durability. I sank the 20 points I was allotted for the demo into Gun Lust, because I don't like to shoot things twice.

Salvador is your heavy damage class. At least that's the way I play him. You can Brawn up and tank if you want, but then you'll be chunk of iron wearing mittens. I did notice I was a little squishy when my level 25 body went up against level 26 enemies, so I may throw some points in Brawn on the next go round. I used an assortment of submachine guns and rocket launchers to get my point across. Once again, shooting at your own feet with a nice explosive weapon during a last stand will keep you in the fight. Gunzerking was incredibly satisfying, allowing me to spew corrosive death and explosive smackdowns on my robotic enemies. I'm going to play this game so hard come September. Be sure to check out our exclusive video interview with Randy Pitchford about Borderlands 2, Gearbox and Co-Op Gaming!