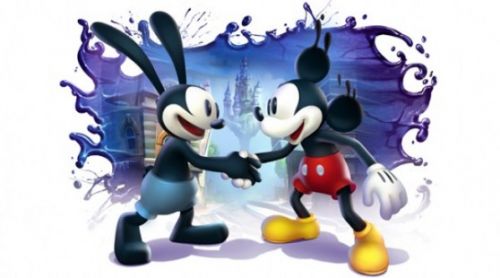 Warren Spector is one of my personal heroes in the game industry, and when I heard we were given an opportunity to sit in a roundtable session with him to talk about Epic Mickey 2: The Power of Two, I jumped at the chance. We were treated to an hour-long discussion and hands-off demo of Epic Mickey 2 and learned just how much of a Disney nut Mr. Spector is.

Forstarters, I think he is getting a little tired of people asking him to make another game like Deus Ex. While that game is incredibly highly regarded for its engrossing setting and multiple options for player progress, Warren pointed out that this is more indicative of his overall philosophy as a designer. To him, the most important thing is to empower the player to progress however they wish, and this is reflected once more in Epic Mickey 2. Areas may require more platforming skill, more manipulation of the environment or straight-up combat. What's important is that you're able to tackle each environment in a way that suits your strengths, rather than be shoehorned into one method of progression.

While the original Epic Mickey was a strictly solo affair, the sequel has added local co-op with Mickey and Oswald the Lucky Rabbit teaming up. Each comes with their own set of abilities - Mickey retains the familiar paint & thinner mechanic while Oswald has a remote control that allows him to control machinery, and he can glide while holding on to Mickey, which lets you cover good distances in the air. If no co-op partner is present, these abilities are presented contextually if the environment requires them. Since the decisions you make in Epic Mickey 2 revolve largely around whether you create or destroy things in the environment and how you choose to take down enemies, you would think that playing in co-op would make life difficult for someone trying to play a certain way, but this is not the case. Mickey and Oswald each have their own abilities, but only Mickey's paint/thinner mechanics can affect the world in a way that would alter the story.

While there's no co-op specific content in the game per se, playing with a friend will let players use more creative methods for navigating the environments since they can work together, which is a nice touch and ties in with the design philosophy that Warren was discussing.

Epic Mickey 2: The Power of Two will be available on November 18th for the 360, PS3 and Wii and supports two player drop-in/out local co-op.