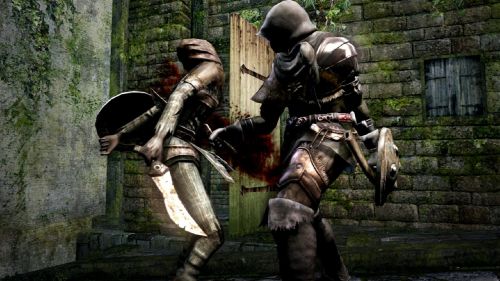 The punishing fantasy game, Dark Souls, is on sale today from Amazon. You can ruin your whole week, maybe even your whole year, for the low, low price of 15 bucks. The Xbox 360 and PlayStation 3 versions are both available. I should note that this is the bare-bones version of the game. It doesn't include the recently released (at least for consoles) Artorias of the Abyss DLC. You'll want to pick that up if you want the whole soul crushing experience. Still, the core game is a hell of a ride.

If you do pick up Dark Souls and you actually enjoy it, you can expect at least a hundred hours of gameplay. You're first playthrough should take at least 60 hours. (Or 135, if you're like some people I know.)  You'll need to play through the game multiple times to see everything it has to offer. I don't know how long the sale will last, so get yourself a copy while it's available. Put it on your game shelf for bragging rights. Get it for someone as a passive aggressive gamer gift. Get yourself a spare in case you want to break one for rage release.

Dark Souls supports three player online co-op. Fair warning: This is a non-traditional co-op title where hostile players may invade your game and try to kill you. Or they may not. That's part of the panic inducing "fun." I suggest checking out our Co-Op Review and Co-Op FAQ before making plans to join a buddy. If you haven't played it yet, it's worth a look. And don't use that "I've got enough to play," excuse. You know who you are.