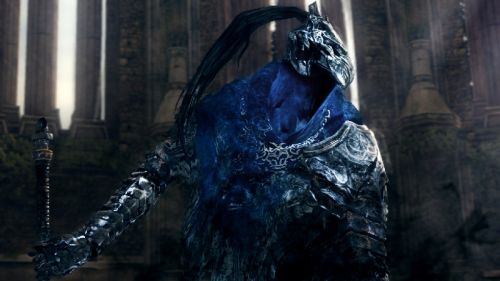 There were some awesome displays at E3. Borderlands 2, Aliens Colonial Marines, Skylanders Giants, and the Big Three come to mind. Despite all the eye candy, on Day One my attention was focused on the simple Dark Souls banner at the Namco Bandai booth. Two monitors played looped footage of one of the game's new bosses. (Hint: Aim for the tail.) I was devastated to realize content from the upcoming "Prepare to Die" edition wasn't playable. I made the best of the situation, and picked the brain of of one of the gentlemen displaying the game.

I asked about the upcoming extra content for the PC version, which will be available as DLC for consoles. We talked about the unique nature of Dark Souls New Game Plus, and how extra content wouldn't work if it was just tacked-on at the end of the game. He did confirm my suspicions that the new Artorias of the Abyss arc would be accessible about a third of the way through the game, depending on what path you choose. Of course, this is Dark Souls, so you won't be able to access Oolacile from a simple menu screen. This is going to be an extra area. You'll have to discover it like you would the Great Hollow or Ash Lake. He even told me how. I plainly stated that when viewing the trailer I saw a giant tooth-encrusted hand seize the player in the Darkroot Basin, the area containing the Hydra and Dusk from Oolacile. The demonstrator then told me exactly what I would need to do to access the new content. That information is best left to a walkthrough, because it is spoiler-tastic. (Let's just say that you'll need to have access to the Duke's Archives, as well as the Darkroot Basin.)

He also mentioned Battles of Stoicism. Apparently there will be some form of PvP arena. This will allow for 3v1 and 2v2 player versus player battles. Yeah, that's right, two on two Dark Souls duels. Interesting. He said there will be some form of PvP matchmaking. I asked if there would be a proper system allowing players to link up with their friends for real cooperative play, but he was mum on that front.

He did not know if console players would be able to access the new content with established characters, or if they needed to start over with either a new character or an NGP. Either way, it looks like we may have to slog through Dark Souls again. I can handle it. Can you?

Dark Souls is available now for the Xbox 360 and PlayStation 3. It supports three player online co-op. The Dark Souls: Prepare to Die edition will launch for PC on August 8th. The extra content will be available to console players later this winter for $14.99. A small price to pay to die again.