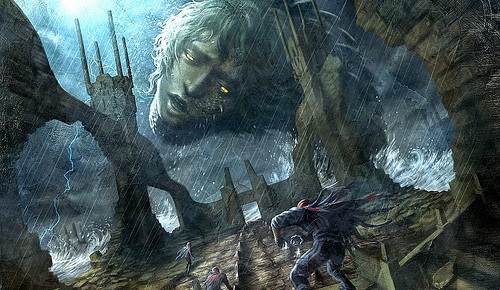 Soul Sacrifice won't be out until next year, but you'll be able to play it before 2013, as long as the world doesn't end. The gruesome fantasy game will allow players to sacrifice themselves (and each other) to cast powerful magical spells. According to Siliconera, SCEJ recently announced that a demo would be available later this year. They didn't say if the demo would be available in the States, so you may need  to warm up those Japanese PSN IDs. Co-op play will be supported in the demo. You can even transfer your saved game to the full version when it comes out in March.

Veteran game maker, Keiji Inafune, recently posted some new information on the PlayStation.Blog. He gave a little back story to a new creature, called the Leviathan, which you can see above. I think the moral of the story is: "Don't keep exotic pets while playing with magic." He goes into a little more detail, but the end result is the same: A giant monster with a grotesque human face running amok. I'm assuming we'll have to kill it by setting ourselves on fire, or shocking our faces with lightning, or coughing up a tornado, or  summoning swords from our intestines. The game looks delightfully brutal. Inafune also went into more detail on Ghost mode, which we covered back on Halloween. In Soul Sacrifice, even death offers more opportunities for co-op play:

Players that have become ghosts are able to openly observe the statuses of the enemies and ally members. You can strengthen your team mates or make the enemies vulnerable by touching them on the screen. So even after you die, you can keep aiding your party and continue the co-op battle until the end with your friends.

I'm looking forward to seeing how this game plays with the whole sacrifice/revive/ghost system. I'm getting a serious Dark Souls vibe from this game. How are sacrificed players rewarded? When can a player get their life back? Will players be able to trust each other, or will everyone just go around sacrificing everyone else rather than healing any body?I already know what I'm going to do, and I am totally not sincere when I say I'm sorry in advance.

There's also a sweet new Soul Sacrifice-themed PlayStation Vita. I don't think this bad boy will be making it Stateside, but man it looks cool. It's going for about $365 in Japan, so it will be a little pricey as an import. I still want it. Maybe I'll do a little sacrificing myself and sell some blood. I'm barely using it.

Soul Sacrifice will be out next year, exclusively on the PlayStation Vita. It supports four player online co-op.