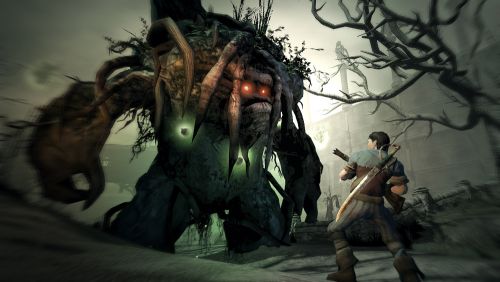 Lionhead’s fantasy role-playing game, Fable II, pulled a Houdini and completely vanished from the Xbox Live Marketplace earlier yesterday. For a short time, no one could view the title through either the “Games on Demand” tab or Fable II episodes on both Live and Xbox.com. Luckily, things are back to normal.

Fable fans thought they might be out of luck if they didn't save Fable II onto their hard drives during Fable II's strange episode yesterday.  At the time, the full game went on random hiatus for no apparent reason whatsoever, and didn't allow anyone to purchase the game off of Xbox Live or Xbox.com. Luckily, Microsoft has caught the glitch and has since returned the game to it's rightful place on the Marketplace:

'We have resolved the issue and the game is once again available. We apologize for any inconvenience this caused,' said an official Microsoft representative statement.

The game could only be seen through the Download History queue if it was previously installed, but attempting to re-install it at any point will resulted in an error message. Strangely enough, the two DLC expansion packs, “See the Future” and “Knothole Island” could still be reinstalled if gamers previously downloaded them, as well as Fable II avatar items, trailers, and other DLC's are still available on Live. Why this is all happened so suddenly and without good warning is strange enough indeed, but both Microsoft and Lionhead Studios have done their part to fix the "isolated issue" and get things back in order for Fable II players. Though this didn't affect gamers who owned the disc version too much, we're glad to see things turned out okay in this very rare case. Hopefully this didn't give that many gamers too much stress to handle.