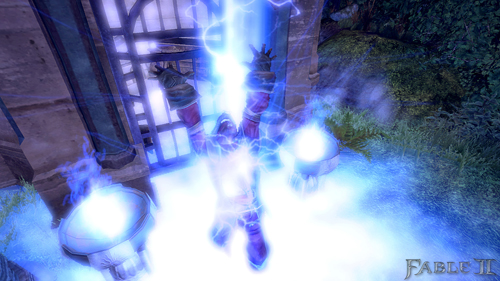 With the announcement of Fable II's DLC, titled See the Future, Lionhead Studios' Peter Molyneux couldn't resist giving a statement. The DLC title suggests two things. First, Theresa, the Seer character, will be worth keeping an eye on, since her job is 'unveiling the future.' And second, there is likely a bright future for the Fable franchise itself. So, what did Peter Molyneux have to say about it?

"Well, while it’s not easy for me to absolutely confirm (Fable 3), it would be pretty poor to say ‘See the Future’ if it didn’t have some connection, wouldn’t it? It would be kind of, ‘See the Present,’"

Aside from the title implications, this download pack will include two new quests, a Colosseum to fight the best of the best for impressive prizes, and the merchant dubbed Murgo will be back in Bowerstone with great new items. In addition to these specifics, there are new hairstyles, new armor, new tricks for your dog, and a few other goodies throughout Albion.

I was personally hoping to see a few improvements with co-op in this DLC, but now it looks like I may be able to cross my fingers for more co-op in the next generation of Fable. See the Future Will be available for download on the Xbox marketplace in May for 560