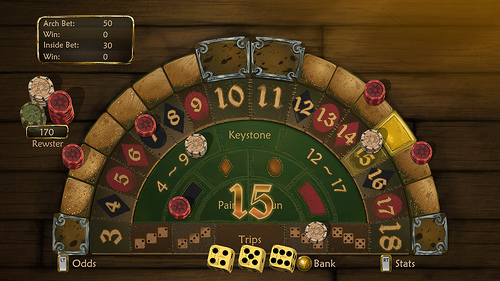 Last week Lionhead's Fable 2 Pub Games were made available via Xbox Live.  While the games themselves will set you back 800 MS Points, those that pre-order the title receive them for free.  The games themselves don't offer any sort of co-op, but what happens in Pub Games is completely transferable to the 2 player co-op Fable 2 game when it's released in October.

Eurogamer has a short article up detailing the process.  The method is simple, once you start Fable 2 and find your way into a pub to gamble, you'll be given the option in to merge the characters and the gold.  The really slick thing is, after this process you can then keep playing outside of Fable 2 and have direct impact on the gold inside.

All of that is well and good, but for those of you who will end up with the darker seedier character in Fable 2 will probably want to pay attention to the following.  There's a pretty big gold glitch in the Fortune's Tower game.  The glitch allows you to bet one thing, but have the computer think you bet a much higher value thereby giving you a tons more gold back - even if you cash out  on a hand you would typically lose money on.  The full video of the process and impressions of pub games are posted after the break.

Finally some impressions of the Pub Games.  Fortune's Tower is incredibly addictive, it's sort of like solitare meets blackjack.  Keystone is a lot of fun as well, though the games typically take some time to go through.  It's basically craps meets roulette.  Finally there's Spinner which is just slot machines.  While I don't think the game is worth the $10 - if you are planning on picking up Fable 2 I recommend you just preorder so you can download them now for free.