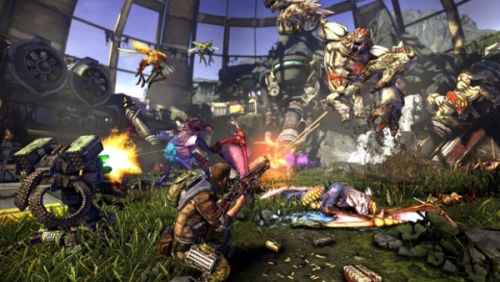 Borderlands 2 content previously exclusive to certain retailers and collector's editions is now available to everyone, for a price. The Creature Slaughter Dome will allow players to compete in a bonus Circle of Slaughter challenge located at the Wildlife Exploitation Reserve. The Circle of Slaughter challenges have been around since the first Borderlands. Players must face waves of  progressively more difficult enemies in an enclosed arena. It's basically a survivor mode.

Borderlands 2 proper already features two such arenas: "Fink's Circle of Slaughter" pits players against hordes of bandits, while the Hyperion Circle of Slaughter fields robotic loaders and cybernetic Hyperion soldiers. Both can be a pain in the butt if you're not properly prepared -- or if you forgot to start the mission until you hit the level  cap. (Whoops.) The Creature Slaughter Dome will allow you and three friends to take on the creatures of Pandora. Judging from the picture above, you can look forward to laying waste to an assortment of Pandora's terrifying fauna.

The Collector's Edition Pack is not as sexy, although I guess that depends on what you consider sexy. It will give you a new head and skin for each character, as well as the Contraband Sky Rocket Grenade. You can see more details here.

Both the Creature Slaughter Dome and the Collector's Edition content is available now through the PlayStation Store, the Xbox Live Marketplace, and Steam. They cost $5 each (400 MSP). They are NOT a part of the Borderlands 2 Season Pass.

For your viewing pleasure: