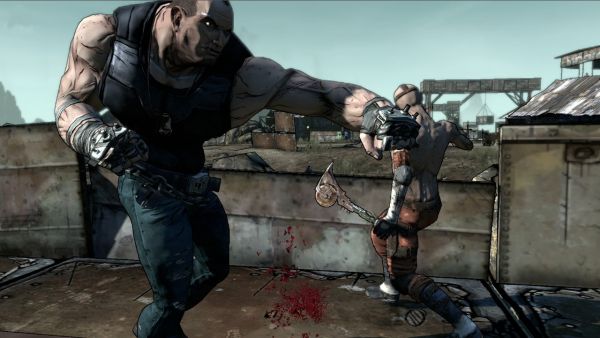 Have you ever been tempted to experiment with little pick-me-up out in the Borderlands? Say you're wandering around the Arid Badlands when a horde of goons surround you. It feels good to berserk just a little, doesn't it? We're here to tell you it only takes once to get addicted to Berserkeroids, and it takes all the friends you have to help you through the ups and downs that follow. This is the tale of an overdose of Berserkeroids, as Nick aka Brick had one too many hits, and tragically could not stop running.

"Well, I began using when I was about 12. As soon as I could muster the strength to go ballistic on the kids at school, I began to abuse it." Brick confessed, "It can be rough out here, ya know. I had no choice!" He cracks his knuckles and shifts his shoulders uneasily within the small group of psychos and skags in the medical shack, each with their own set of issues to overcome. Brick isn't alone in his need to survive or crush things with his fists out here, it can be brutal hunting for treasure on Pandora.

Fortunately in the case of Brick, he had a circle of friends to rely on when it got to be too much. We asked Katrina aka Lilith about that dreadful day when the overdose happened. "When I first met Brick, he was a pretty cool guy. Sure, he'd go crazy once in a while, beating someones face in until there weren't no face left - but otherwise..." Lilith trails off. "Until he....he just started running. He wasn't even punching things anymore! Just, running...and running...I couldn't even catch up with him to..." Lilith felt helpless against Bricks Bersererkoid abuse, so she asked for help from their other comrades. "He just needed a chill session, that's all." the ever calm hunter, Mordecai chimes in. These "chill sessions" come in the form of weekly classes to help control Bricks need to abuse Berserkeroids.

This type of running overdose isn't entirely uncommon in people like Brick. He can punch things until there is nothing left to punch, then the high from that last berserk lasts too long and uncontrollable running takes effect. After Brick hit up one more time during this running spell, the crash after made him feel devastatingly slow, like a snail trying to drag a station wagon. That's when you know they've gone too far, done too much, and there's no turning back without help.

Berserkeroids are a real problem on Pandora. in order to recognize when your friends are abusing, here are a few tell-tale signs.

- excessive uncontrollable running
- grunting or growling with no enemies around
- flexing uncontrollably, especially with no women around to impress
- they're Brick
- threats directed at Claptrap for any reason
- uttering the words "hulk smash" or other pop-culture rage triggers

When you notice these signs, notify Zed immediately. He may not be a fancy doctor, but he's got proven methods for flushing out Berserkeroids so your friends can get back to their regular looting lives on Pandora - it's okay to tell Zed, your friends will thank you when they're clean.

Berserkeroids happened when Nick had a little glitch in his gameplay that made his character, Brick, Run like crazy in a co-op session we had recently. I couldn't even catch him with my Sirens phase walk, and this berserk-running lasted about 15-20 minutes. It was amusing and didn't really effect or hurt the gameplay, so it was a fun choice for our "This Week In Co-op" feature.