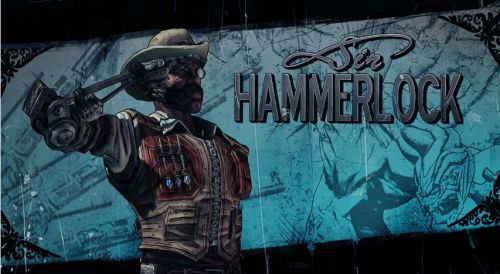 Are your ready? More Borderlands 2 DLC is heading our way. Details have been surfacing for "Sir Hammerlock's Big Game Hunt," the third add-on for the role-playing shooter. Similar to the two "leaks" that basically announced "Captain Scarlett and Her Pirate's Booty" and "Mr. Torgue's Campaign of Carnage," details for "Big Game Hunt" appeared in the most recent patch.

It's almost like Gearbox is doing this on purpose, simply to create buzz for the next installment of DLC. Oh wait, I meant to say; Gearbox is successfully creating buzz for new DLC by including key details in early title updates and patches. Good work, Gearbox! From here on it get's real spoilery real quick. you've been warned.

First up, three new Achievements/Trophies were attached to the most recent downloadable fix. They are listed on the Gearbox forums as:

1) Face Off - Completed the mission: "The Fall of Nakayama" (Bronze trophy)

2) Done that - Completed all Hammerlocks hunt side missions. (Gold trophy)

3) Been there - Discovered all named locations in Hammerlocks Hunt. (Silver trophy)

My OCD is screaming for me to switch numbers two and three, so I'll just throw some quotes around them and make it all better.

Well, that doesn't tell us much. Luckily, Reddit user "MikeTheInfidel" (fake name, I'm assuming) "dug around on his PS3" and came up with even more details for "Sir Hammerlock's Big Game Hunt." (By the way, Mr. TheInfidel has done this sort of thing before, and he was right.)This is what he claims:

There's also a blurb for the DLC:

Danger! Excitement! Mustaches! It's time for another episode of Vault Hunter Adventures, featuring Sir Hammerlock! In this week's tale, our hard-boiled heroes travel to the savage continent of Aegrus! Their goal? To uncover the most exotic creatures Pandora has to offer, and give 'em the old one-two!

I'm happy the new content doesn't take place in the middle of yet another desolate wasteland. Bring on the jungle!

The "Scarlett" DLC came out on October 16, "Torgue" dropped on November 20, so I expect to see "Sir Hammerlock's Big Game Hunt" soon, possibly on Christmas day. I should note that there has been no mention of a level cap increase. You'll have to reset your Badass Rank if you really want to improve your character.

"Sir Hammerlock's Big Game Hunt" will most likely be priced at $10, and it is also a part of the Borderlands 2 Season Pass. I expect an official press release, complete with screens and a launch trailer, very soon.