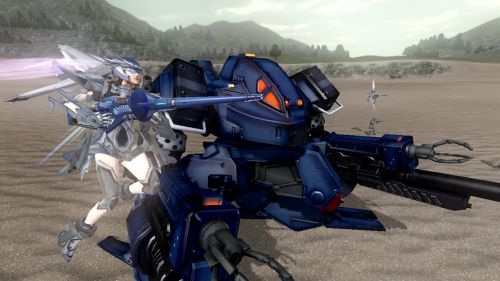 True or False: Mechs make everything better. I know what you're thinking. The obvious answer is "true," but you're wrong. There was a mech in Earth Defense Force 2017, and it, along with the rest of the vehicles, were some of the most vile, uncontrollable abominations to have ever been presented in the medium. The Bazelato (helicopter), the Vegalta (mech), and the Gigantus (tank), simply existed to mock the player, and nothing more. It's a good thing the rest of the game was so damn fun.

Earth Defense Force 2025 will have a mech, too. Judging from the screenshots, it looks like a meaner, bipedal version of the Cobra H.I.S.S -but you know, all meched-out with arms and stuff. Some of the images look absolutely badass. I hope the thing has a target reticle, or it's going to be the Vegalta all over again. The new screens also show off some other bug slaying vehicles, including an APC and a motorcycle with a side car. Nothing says "Badass Bug Stomper" like showing up for interplanetary war in a side car. I'll walk, thanks.

We've also got two new videos for you today. Both feature a ton of gameplay footage, including appearances from all three character classes, the Ranger, the Wing Diver, and the Air Raider. These are the class names as they are translated from the Japanese Earth Defense Force 4 site, so they may have different names in the western version. The character models still have those weird swivel hips, and the Wing Diver still has questionable fashion sense. Seriously, who wears a skirt with a jetpack? That's just poor planning.

Anyway, the videos are in Japanese, but they're still full of alien death and destruction, and that language is universal... as long as you're on Earth. Enjoy!

These videos have almost convinced me to bust out EDF 2017 and jump into Inferno mode. Almost.

Earth Defense Force 2025 will support four player online co-op. There's been no mention of local co-op play, but my fingers are crossed for split screen. EDF 2025 will be coming to the Xbox 360 and PlayStation 3 this year. With the amount of videos and screenshots being released, my guess is sooner rather than later.