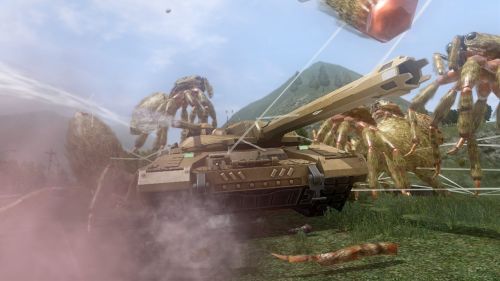 Earth Defense Force 2017 didn't have much going for it when it came west back in 2007. It didn't look very good, it was rather repetitive, and the vehicles were an uncontrollable nightmare. Still, it won a place in many gamers' hearts, including my own. It was moderately successful, and became a cult classic. EDF 2017 was recently ported to the PlayStation Vita. We'll post a review on that version tomorrow. It's also getting a proper sequel, titled Earth Defense Force 2025. I don't know if the vehicles will be any better, but one things certain, there's a lot of them.

The EDF will have several sweet rides available in 2025. We've already covered some of them here. Today we also bring you images of the Epsilon Armored Railgun, the HU04 Bruto Helicopter, and the E651 Titan tank. All three vehicles feature seating and armaments for three players. There's basically room for a driver/pilot and two turret gunners in each war machine. We've also got some nice pics of the Ravager Mothership and giant Walking Fortress in action.

Earth Defense Force 2025 supports four player online co-op. It will be available on the Xbox 360 and PlayStation 3 later this year.