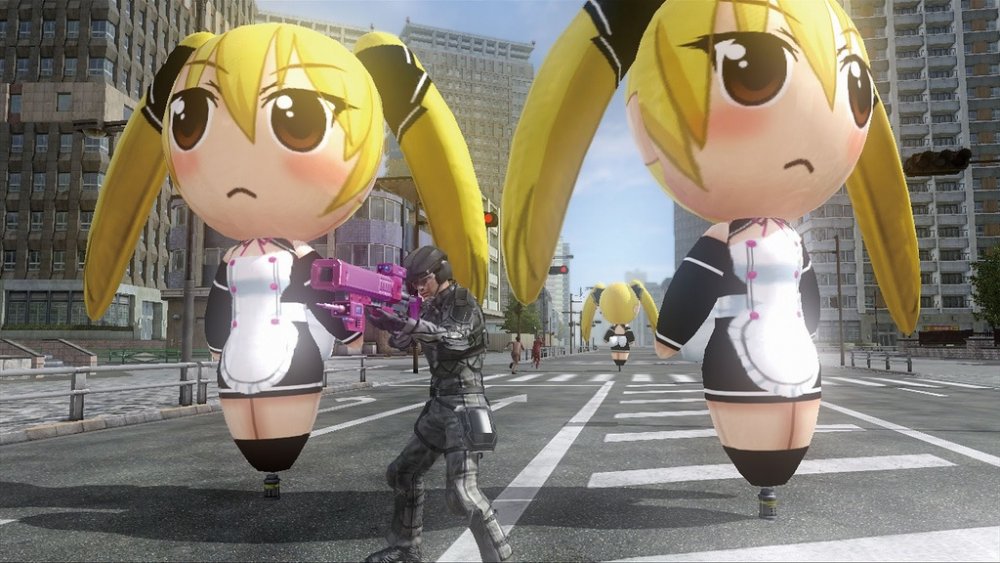 News Flash!  Giant ants are going to be crawling out of the ground in February 2014, there is only one team that can stop them; the Earth Defense Force 2025.  Pre-order the game today and get a few in game extras that are a tad more useful than a giant spray can of Bug-Be-Gone.

Like with so many modern pre-order incentives, what you receive will depend on which shop you purchase the game from.  PlayStation Blog have revealed what extras you are going to get for the PS3 version of the game when buying it from GameStop, but expect the 360 version of the game to hold similar goodies:

Available exclusively to customers at GameStop is the Air Raider Weapons Pack, featuring:

Pure Decoy Launcher (Setsu) — a weapon that distracts the enemy by discharging a large balloon that takes the shape of an attractive female, but the enemies will meet their fate when the balloon unexpectedly self destructs, destroying everything in its vicinity.

The BMO3 Vegalta Gold — a limited edition, gold-coated model that will reflect radar waves and has a combat burner to throw flames. Players will also be able to take flight for short periods of time with it equipped.

If getting extras from pre-ordering a game is just not your bag, you can go down the old fashioned DLC route and pay through the nose for the following:

Reflectron Laser — A special laser that fires in two directions and can even shoot through narrow passageways. It’s an effective weapon with giant insects, as it can maximize range without obstruction.

Gleipnir — This super weapon silently discharges balls of energy with the ability to launch continuous attacks. Only Wing Divers can use this weapon, as it requires the Psionic Link.

Volatile Napalm — A military grade discharge device that sets everything ablaze and damages the target and surrounding areas.

Pure Decoy Launcher (Mian) — a weapon that distracts the enemy by discharging a large balloon that takes the shape of an attractive female, but the enemies will meet their fate when the balloon unexpectedly self destructs, destroying everything in its vicinity.

DLC packs are all well and good, but it would be nice to have a time frame for when they are planned for release and for how much.  This is not yet known, but the game itself is now planned for sometime in February 2014 on both PS3 and 360.  There will be a co-op campaign in the game that supports 2 players locally, 4 players online, or a combination of the two.