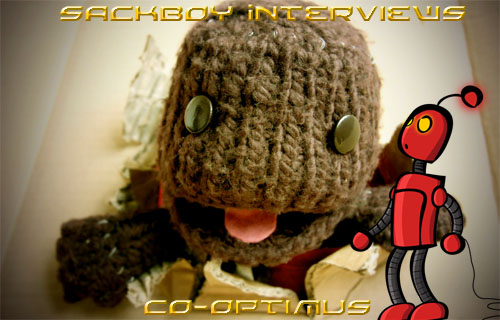 We know that in the world of games journalism that it’s usually the journalist who sits down with someone in the gaming industry to do the interview. But this week, we thought we’d have some fun and let the game industry interview us! Sackboy, of LittleBigPlanet fame, swung by to grill the staff and contributors of Co-Optimus about their first co-op moments, their favorite co-op games, and more. Want to know whose gaming life was changed by playing Contra? Read on!

Sackboy: First question – What is your favorite co-op game and why?

Loren "AgtFox" Halek: Diablo 2. Probably the most time I've ever spent with co-op in a game back when I wasn't really considering the whole "co-op" concept.

Marc "DjinniMan" Allie: Rock Band, either version. It is without a doubt the best game ever made that everyone enjoys; even nongamers want to play it. There is no greater feeling of cooperation than 5 starring that tough song, or beating World Tour. The game speaks to my inner band geek in so many ways, it has to be my favorite.

Blake "Broodax" Corner: I agree completely, Rock Band. It allows geeks like me to feel like rock stars. Plus, what's "more co-op" than a rock band? [Ed. note: Nothing; unless you’re Fleetwood Mac]

Mike "pheriannath" Katsufrakis: Secret of Mana - When the game was released, I thought that Japanese RPGs were the best thing to happen to gaming, and being able to tackle an epic (in both length and scope) story with two of your best friends was, and to a degree, still is unique.

Jason “OrigamiPanther” Love: Guardian Heroes. My roommate in college and I used to play that all the time (probably when we should have been studying). Something about the combination of a beat ‘em up style game with RPG elements and all those unlockable characters kept us coming back for more.

Nick "bapenguin" Puleo: I'd have to say Crackdown is some of the most fun I've ever had in a co-op game. It may not have been the best game, but in terms of sheer fun, hands down the winner.

Jason: I remember playing through all of Gauntlet with my family. We played through every level, got every clue from Mordak, and killed the final boss (just barely).

Mike: While I probably played some earlier ones, the first one that really got its claws into me was Gauntlet as well.

Marc: I'd have to say Contra on the NES. It changed my gaming life!

Sackboy: You might just see some of those classic levels remade with a LittleBigPlanet twist. Speaking of which, what classic co-op game would you like to see remade?

Marc: X-Men: the Arcade Game, of course. The X-Men Legends and Marvel Ultimate Alliance games are pretty good substitutes, though. Still, an XBLA/PSN version with 6 player co-op would be the bee's knees.

Loren: I’d like to see the X-Men: Arcade Game remade as well. That, or the Turtles or Simpsons arcade games.

Blake: I’d love to see the original Battletoads for the NES remade. [Ed. note: Preferrably without that racing level…]

Jason: Lost Vikings. Playing that game again made me remember just how good it was. A PSN/XBLA release would be the perfect platform for it.

Mike: Well, my original answer for this would have originally been Diablo 3, but I already got that wish! I think I'll go ahead and say a modern update of Gunstar Heroes (retaining the vibrant art style and insane transforming bosses, of course) would make me a very happy gamer.

Sackboy: Those were some great games! Ok, here’s a tough one: what single player game do you wish had co-op in it?

Jason: I’d like the next Uncharted game to have online co-op. One person playing as Nathan, the other person could be Elena or Sully; you could have levels with multiple paths for the players to explore. Maybe leave out the “look at your diary for a clue” aspect for solving the puzzles, though.

Nick: All of them. Ok, if I had to pick one it would probably be...no, I want all of them to be co-opable.

Sackboy: Too bad I’m not a genie sackboy! I saved the most important question for last. Who do you co-op with the most?

Nick: My buddy Dave who I grew up with. We started co-oping back in the genesis days with Streets of Rage 2, Golden Axe 2, and others.

Marc: That's an easy one! My two sons, 7 and 14. They are the perfect co-op companions, and even their mother joins us when we fire up Rock Band!

Mike: My wife (we play a LOT of Rock Band!) or my friend Jason (who I usually end up firing rockets at).

Jason: My neighbors or my friend Mike (please stop shooting rockets at me) and his wife.

Sackboy: Thanks so much again for letting me swing by fellas! Hope to see you online soon!

1)  Those who pre-order the game from GameStop or Best Buy will get the added bonus of getting a Kratos or Nariko outfit for their little "Sackboy" or "Sackgirl". What other Playstation game icons has MediaMolecule shown in-game?

2)  "Sackboy", or "Sackgirl", wasn't always the name of your avatar in LittleBigPlanet. Before giving it the "sack", what was the original name of the LBP mascot?