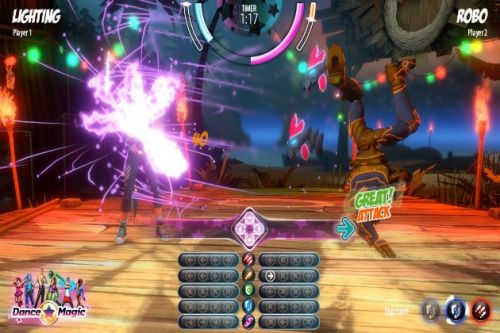 Who says that the January release schedule is dead?  OK, perhaps it is quieter than usual, but there are new co-op games to be found, if you are willing to look a little off beat.  Dance Magic will be disappearing from the pre-release lists and magically reappearing exclusively on PSN from 8th January.  The game is a Move operated disco simulator that allows 2 player co-op online as well as mysterious collaborative dancing.

Dance Magic does not look like being an AAA release and is nestled somewhere down amongst the unfashionable end of the alphabet.  To make us better informed on the game, Gaijin Entertainment have released some details:

What if dancing could heal the world? In Dance Magic, it can.

Imagine a world where every person is not only a dancer, but also a warrior fighting for peace on Earth. These people have developed Dance Magic, a new form of biological energy that can only be realized by dancing. From the smallest personal disagreement to widespread military conflicts—all can be resolved through dancing duels.

Now worldwide peace is threatened by a rising evil. A powerful dancer has plans to use Dance Magic to take over the planet. People will die and the power of dance will be used to destroy, not to heal. Join the fight to stop him! Take part in the most important dance-off of all. You and your friends can save the planet, and the human race!

If that synopsis has not put you off, there does appear to be some hidden depths to the game.  There are 7 dance styles on offer including Disco, Hip Hop and Latin.  For co-op fans there is a online co-operative 2 player mode alongside the single player campaign.  The official website also mentions a collaborate dance mode, how this differs from the co-op is anyone's guess.

Still reading?  Firstly, congratulations.  Secondly, check out the trailer for the game to see the magic of dance in action: