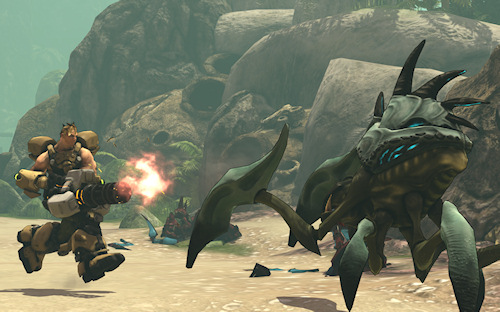 Firefall has been in beta for what seems like forever, but up until this point, you had to have been accepted to try out the five player co-op game.  This weekend though, that's all about to change, as Red 5 Studios is opening up the servers for anyone who signs up.  The beta kicks off at 10AM PST on January 25th and will run until 11:59PM PST on January 27th.  It's a short beta, but you'll definitely want to check it out to get a feel for the free to play shooter.

Additionally, throughout the weekend, players who take part in our Beta Weekend will unlock an exclusive in-game decal for use on their many Battleframes! To get your exclusive decal, all you have to do is log in during the Beta Weekend.  Following the Beta Weekend, you’ll be able to obtain your badge of honor at the New You station in game.

There's still no release date on the game, but it appears we're finally getting close.  This all out kind of stress test usually is a good indication that things are wrapping up - so barring any technical issues - we could be seeing an official release relatively soon.

There's also going to be prizes and giveaways during the beta - so you'll want to head over to www.firefallthegame.com/betaweekends to sign up.