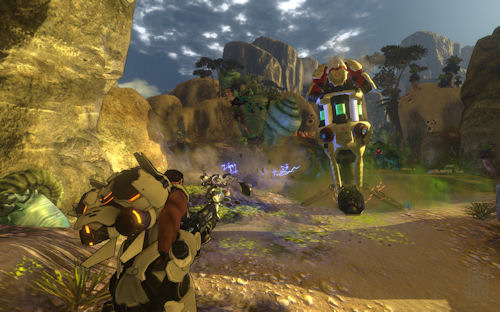 Red 5 Studios have announced a brand new massively multiplayer shooter called Firefall which will focus on team based and cooperative based gameplay.  The studio, founded by World of Warcraft lead developer Mark Kern and Starsiege Tribes lead designer Scott Young, plans to release the game late next year on the PC utilizing a free to play model.

The core of Firefall seems to be around Battleframes.  These suits allow players to customize their powers and unlock unique abilities for the class based combat of the game.  What stands out for me is the look of the game - which reminds me a bit of Borderlands in terms of style, though there's still a realistic edge to the terrain.  There's a 10 minute gameplay trailer on the official site (and posted below) which I recommend watching, and if you head over to the site you can sign up for the beta too.

According to the press release all updates and content for the game will be free as well, instead battleframe enhancements and other customizations will cost players money.

Here's a bit of the back story:

Firefall paints a beautifully devastating vision of Earth, 200 years in the future. The promise of a new clean energy source, Crystite, leads to the disastrous arrival of the Melding, a hostile energy storm that engulfs most of our home planet. Earth’s surviving humans must band together in the eye of the Melding storm to save our species. Unfortunately, a new danger emerges as a bloodthirsty race known as The Chosen threatens humanity’s survival.

There's no word on when the beta will begin, but the video makes it look like the game is well on its way into development.  Sign me up!