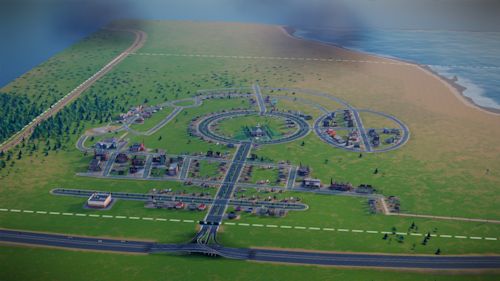 This past weekend, SimCity held a closed beta test for a select group of individuals to test out some very basic features of the game and give EA's server infrastructure a good ol' workout.  While the beta didn't feature any of the multiplayer functionality, there was plenty of opportunity to see just how cooperative play is going to work when the title is released on PC on March 5th.

First though, let's talk about how the game works.

Perhaps the biggest change for veterans of the SimCity series is just how zones and roads work.  Roads are the lifeblood of your cities now - they carry power, water, and sewage to your sim citizens.  Gone are the days of running water pipes and dragging power lines across properties.  The zones themselves - residential, commercial, and industrial - now cling to the roads they are part of.  You'll no longer be building giant blocks of houses that are seemingly gridlocked from the outside world - a house or a business must touch a road.  Also gone are light, medium and heavy zones - instead the type of building that will transpire in a location is governed by the type of road you place down.  A two lane road would be light, a four lane road medium, and a heavy or dense zone would come from highways or something bigger.  It's a unique and different method and might throw veterans off, but in the end, it's a welcome change. Outside of your basic setup for growth you'll be building the usual civic structures in SimCity.  Fire, police, hospitals, schools, and several other facilities become a necessity as you grow.  The game does an excellent job communicating just where and what kind of benefit you'll gain from placing a structure.  Affected areas of coverage are obvious thanks to shaded overlays and you'll be able to pick the perfect spot to stop the spread of crime, fire, or cover the health needs of your sims.  Every structure is easily upgraded too,  expanding its benefits and saving some cash in the process.  For instance a fire station can be upgraded with additional garages for more trucks or an alarm bell for a quicker response.  It's here that we see our first example of how co-op play could work.

Your city is part of a region of cities and every city within a region is connected by a highway.  This allows the cities to share resources.  In our fire house example - perhaps we have some extra fire trucks that are sitting idle - you have the option to make them available to neighboring cities - helping them out and earning you some extra cash in the process.  This process seems to be available to a lot of civic resources, but like we said, this is a beta so things are subject to change and it's tough to gauge exactly what's going on. These resources aren't just administrative, but can be industrial as well.  Perhaps you've built a power plant and have plenty of extra juice.  You can sell this to neighboring cities that might not be producing enough.  Other cities also provide tourists to your city, so building attractions like an Exhibition Center or a Casino can provide income outside the normal tax rates.  With several of the regions supporting up to 16 cities and each city playable by a friend, there's a lot of potential for co-op.  You might need a degree in economics to understand just how the trade is going to break down in SimCity, but I can definitely see cities specializing in certain things and selling that resource.

All in all the beta of SimCity was a tease.  The amount of detail in the game is simply amazing.  Every citizen is clickable and you can see where they were, where they are going, and what they want to do.  I witnessed crimes happen and police show up as a firefight breaks out.  I watched firefighters put out blazes as people ran screaming from their burning buildings.  I saw ambulances pick up injured people from industrial accidents.  And I witnessed protests outside of city hall because I didn't have enough parks for my little Sim to play in.  Johnny just wanted a sliding board!

The piano filled music combined with the city in motion was simply hypnotic.  I could just sit back and watch the dance all day.  Day gently turns into night, the city lights up, rain falls, cars whiz by on the roads. It's almost meditative.

One hour chunks were definitely not enough for this game - March 5th seems so very far away.

You can still pre-order the game from Amazon and get $20 Credit.

*This preview is based on the beta version of the game, certain features we talked about may change when the full version is released.*