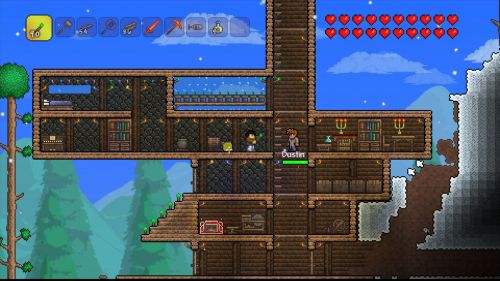 Terraria’s release onto the console is almost here! To keep the hype going, we have a brand new trailer describing the online features of the edition, as well as a ton screenshots to check out.

As we mentioned last month, Terraria’s console debut is right around the corner. Setting itself apart from the ever popular PC version, the upcoming console versions of the game will have a number of co-op features that gamers should take note of. 505 Games’ latest Terraria trailer explains it all:

Just like in Minecraft: Xbox 360 Edition, up to eight players will be able to join up online (or four on the same HDTV) for some split-screen co-op. Terraria will also support a handful of new tutorials to help players get started and become familiar with the game. New world maps to explore, along with new equipment, weapons, and cute pets will be offered, along with a horde of unique enemies and a mysterious final boss not found in the PC version of the game. This will give PC players a reason to go check out the console versions

No official date has been set for the PlayStation 3 or Xbox 360 versions. The trailer does state that Terraria will be arriving “soon”, so we’ll do our best to get the information out there as soon as we hear anything. Be sure to check out the sweet screenshots of the game below!