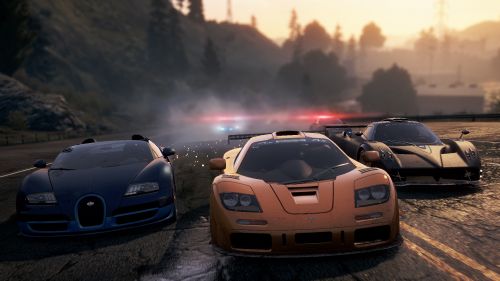 One of my favorite co-op games in the past few years was Criterion's Burnout Paradise. I'm really not into the whole racing sim genre, but that game was crazy and fun. Particularly when you played co-op. Unfortunately, Criterion's next couple of big release games, this time in the Need for Speed series, didn't offer up any of that same co-op fun. Criterion seems to be remedying that, to a degree, with the WiiU release of Need for Speed Most Wanted, which will include a two-player local co-op mode.

The new co-op mode is called "Co-Driver" and initially sounds like it entails what you might think. One person drives the car while the other person looks at maps on the WiiU GamePad. That didn't work out so well for some games that implemented a similar mechanic.

Criterion has added a bit of a twist, however, as the player on the GamePad has more to do than just stare at maps all day and be a navigator. He or she can also change whether its night or day, change the amount of traffic in the city, distract police, and activate different enhancements on the car. That... kind of sounds fun. The description reminds me of the traffic scene from the remake of "The Italian Job" during the heist. You can be a hacker just like Seth Green! Need for Speed Most Wanted is set to release in North America on March 19, 2013 while Europeans get it a couple days later on March 21, 2013.