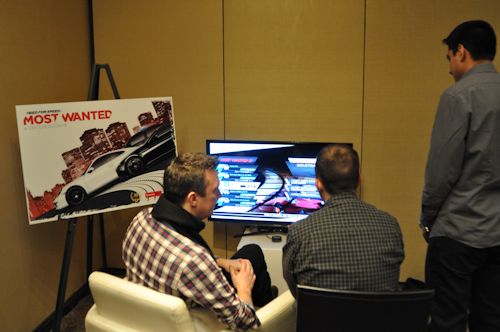 It wasn't long ago we learned that the Wii U was getting a special version of Need for Speed Most Wanted, complete with a local co-op mode.  I recently went hands on with the game and checked out just how the co-op works, and while it's not a "true" co-op mode in the sense there are separate players working together for some sort of common progression, what is there is a family friendly way to play together.

I'd like to dub the co-op mode in Need for Speed Most Wanted - Drivers Ed.  It's actually called "Co-Driver."  The way it works is simple - two players can use any combination of controllers and both control the same car at the same time.  It's like those cars in drivers ed where both driver and passenger have a steering wheel and gas/break pedal.  I was told that the game will bias the Wii U's gamepad, but both players do have full control over the car.  You can even use the Wii U Gamepad's gyro sensor to act as a steering wheel if you want.

I know what you're thinking, this doesn't really sound cooperative.  If anything it'll be a way to grief the other player.  And this is true - until you think about it from a family setting.  Perhaps your 4 or 5 year old is learning to play the game.  You sit back and watch with the gamepad in hand as they use a pro controller to try to drive.  You give them subtle nudges and taps in the right direction when needed.  You help them avoid the walls, and make sure they don't over steer on the turns.  You teach them to drive without actually interfering.  But it goes even further with the touch screen than just steering.

On the touch screen there are one button controls to do things like spin out the cops, turn traffic on and off, or even switch the scenery from day into night.  There's also a button that allows you to switch or repair a car on the fly and adjust it's paint job.  While some of this is cosmetic, some of it can help someone who isn't the best of a driver in a game like this.

I jumped into a few police chases in Need for Speed Most Wanted with one of the developers.  There's definitely a co-op feeling during the intense speed driving, several times he'd give me the heads up of where to go next by looking at the map on the gamepad.  In a way it felt like there were two of us in the car with one of them looking at a GPS on their phone.

While the co-driver mode isn't really traditional co-op, it does make sense on the family oriented audience of the Wii U.  I actually had some fun playing with t