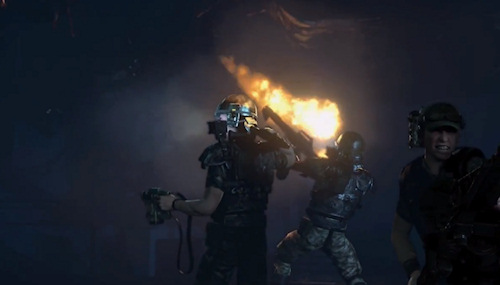 Aliens: Colonial Marines will finally see the light of day next week, over four years after the game was announced. The Gearbox developed title will focus on cooperative play between marines as they take on swarms of alien baddies set in the familiar universe. To celebrate the launch, publisher SEGA has sent along a fresh look at the trailer called "Contact."  If it seems familiar, a shorter version of it was released last year.

Well that looked all kinds of awesome.

Despite the game not being released yet, it appears we already have word of the first batch of DLC we'll be seeing.  Spotted on a sign at Wal-Mart there's mention of content called Bug Hunt.

Team up with your friends to take on waves of increasingly difficult enemies in an all new game mode.

According to the sign that game mode is $14.99 and "only available at Wal-Mart."  There is a release date of March 19th on that content.  It's unclear if this is just a bonus for purchasing at Wal-Mart that'll be available as DLC later or what.  I'm sure more details will be revealed shortly.

Aliens: Colonial Marines is out Tuesday, February 12th on the Xbox 360, PlayStation 3 and PC.  A Wii U version is coming this Spring.  The game features a four player online co-op campaign.   The console version of the game features two player split-screen co-op.