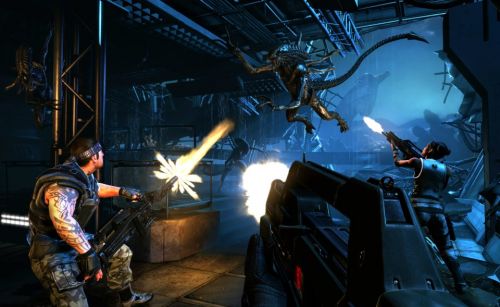 Aliens: Colonial Marines has a kick ass new trailer out today. It's actually called "Aliens: Colonial Marines - Kick Ass Trailer." Damn, Gearbox, I just got used to typing "badass" in each and every one of our Borderlands 2 stories. Now you're going to go and change it up on me? Anyway, this trailer is all sorts of kick ass. I think. I have mixed feelings on this one. Why don't you check it out and let us know what you think?

Warning: Some NSFW language. Earmuff your children, pets, and co-workers.

That ain't Al Matthews barking at the marines. The narrator doesn't sound like a battle-hardened warrior. He sounds more like he needs a nap and a lozenge. But enough of that. Feast your eyes on all that Aliens fan service: Space ships! Burning space ships! Marines! Xenomorphs of all shapes and sizes! Cramped narrow corridors! Pulse rifles! Sentry guns! Aviator sunglasses! A power loader! And Bishop! Or at least some version of Bishop!

And don't forget, you're fighting for the title of BAMFs in the galaxy. I'm all too familiar with such battles, except instead of meaningless titles, it's a battle for power over the remote control. I won that battle once... it... it wasn't worth it.

Aliens: Colonial Marines supports two player local co-op and four player online co-op. It will launch on February 12 and be available on the Xbox 360, PlayStation 3, and PC. It will come to the Nintendo Wii U at a later date.