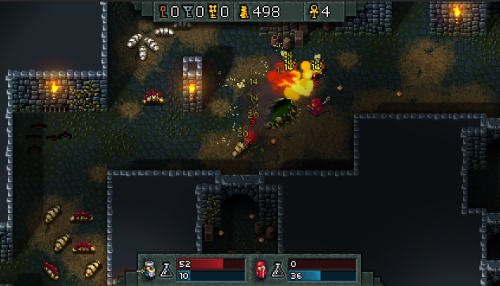 While watching hammers might be an exciting hobby, indie dev team Jochum Skoglund and Niklas Myrberg have something a bit more flashy in mind with their upcoming title. Hammerwatch is inspired by classic arcade games such as Gauntlet, providing players with dungeons to crawl through, multiple character classes, and swarms of enemies to crush. The best news is that in addition to single player mode, Hammerwatch will support online, local and LAN-based co-op games for up to four people!

The central focus of Hammerwatch is combat, as the trailer so subtly suggests, but it isn't a mindless button masher. Secrets are numerous and puzzles require both brain power and teamwork to complete. There won't be an inventory system, skill trees, or traditional loot gathering. Instead, characters will grab upgrades by purchasing them from NPCs, meaning everyone can focus on killing things instead of tweaking stats or alphabetizing potions. Hammerwatch will also ship with modding tools to allow players to make custom levels and campaigns.

More features to get excited about:

Hammerwatch is set for release Q2 2013 for PC, Mac and Linux. Show some support on its Greenlight page as well as the active devlog discussion on the TIGSource forums.