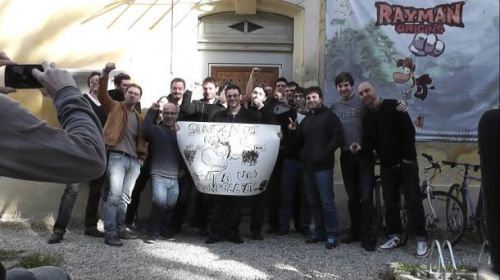 Michel Ancel and other developers of Rayman Legends are upset with the recent decision to postpone the Wii U release of the game in favor of releasing it with the Xbox 360 and PlayStation 3 versions, and have come together to protest the title’s latest delay.

A few days ago, we talked about Rayman Legends’ most recent delay. Deciding to forgo the initially exclusive Wii U release of the game, both Xbox and PlayStation versions were decided to be made as well. Ubisoft has then chosen to release all the games simultaneously in September of this year, and will compensate the Wii U consumers with an exclusive Rayman Legends demo (yes, only a demo) for the long delay. Ubisoft Montipelier developers (not exactly thrilled about having to wait for Rayman Legends release) have since voiced their opinion on the matter, are trying to get support from the community to get Ubisoft to release the Wii U version on February 26th. A couple of photos of the developers protesting this decision have been forwarded to our friends at Eurogamer recently, showcasing the group holding up a hand-drawn banner they made. The banner reads in French: “Sortez nous Rayman. Soutient a Ubi Montpellier,” meaning “Release Rayman. Show support for Ubisoft Montpelier.” Rayman can be seen in the center of the banner with tears running down his face with the phrase: “Please!” written next to him.

Quite the bold move from the developers, possibly risking their jobs, but it does show us that they keep their customers’ satisfaction as their top priority. We’ll keep everyone updated with anything more we hear from Ubisoft Montpelier’s developers. In the meantime, leave us a comment below telling us if you think Rayman Legends Wii U should wait for the other versions or release as originally intended!