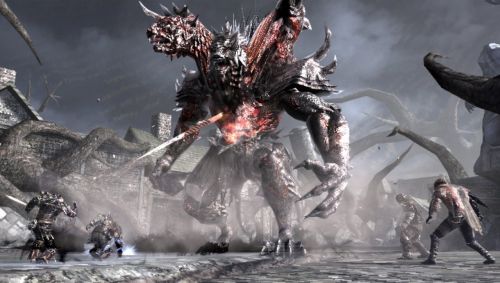 For many Vita owners, Soul Sacrifice is shaping up to be one of the sole reasons to own the system. A monster hunting epic that features heavy emphasis on magic, Soul Sacrifice has been long awaited by Vita owners wanting a substantial game for their handheld. In addition to the cooperative play features, during the course of the game, you will come across various NPC companions who will help you on your journey. Each companion has unique abilities that they can use on your enemies, who were once humans. Throughout the game, you can come into contact with a total of 100 companions, some of which are a part of the main story. In “Free Quest” mode, the player can bring along two companions to help fight. Let’s take a look at three of the companions, with screenshots below, courtesy of Famitsu, and discovered by Siliconera.

Perceval is an odd wizard who makes his debut in scenario “Children of the Demon.” He can often be found scratching his chest until it bleeds, which he casually dismisses. However, he states that a part of him is missing. Sensing that he may be clawing at himself to find his humanity, the main character worries for Perceval. The two come to the realization that they are pursuing the same target. The origins of Perceval’s mysterious state of being will be revealed in the main quest.

Gawain can be found in his own scenario called “Agony of the Werewolf.” Gawain has a personal feud with the demon known as Werewolf, who is guilty of slaughtering his friends. In a quest for vengeance, Gawain has been hunting the Werewolf for 10 years, during which time he lost one of his eyes in an altercation. Haunted by the scars of his past, Gawain will first have to fight the main character before joining him on his quest.

Following the theme of knights in King Arthur’s court, Lancelot appears in the scenario named “The Knight’s Vengeance.” He is a powerful wizard and minion of King Leode. The king hates witches, so even though Lancelot is skilled in his art, he finds himself looked down upon. He is also known infamously as "the wizard of murder," and is looked at like a "dog." Despite the epithets hurled at him, he does not seem to mind. Lancelot serves a mysterious purpose that will be revealed to the hero in time.

Soul Sacrifice is shaping up to be a classic adventure for the Vita.  Look for the game to be released on March 7th in Japan, and April 30th in the US. It will feature up to four player local and online co-op.