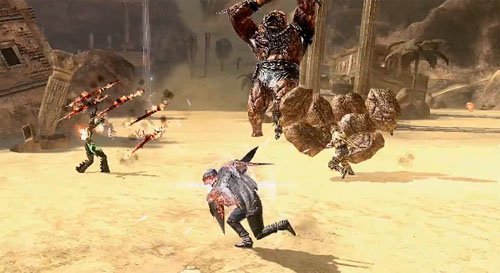 Soul Sacrifice, the game where you can hurt you friends - but in a cooperative way! - is a pretty highly anticipated Playstation Vita game this year. With a unique premise (you can either choose to save or sacrifice defeated enemies or even allies), plenty of mythological lore, and a dark, gritty feeling to it, it's not difficult to see why many Vita owners are looking forward to this 4-player co-operative title.

Many wonder if it'll be a "system saver" or even a "system seller" for the visually impressive, but rather expensive handheld Vita. While only time can tell, for now we have trailers. The latest trailer released for Soul Sacrifice shows off some of the action-driven combat as well as some pretty slick-looking environments. All of this set to some pretty epic and heroic music.

Soul Sacrifice is due out on April 30th in the U.S. for the PSVita. It will support 4-player online or local co-op.