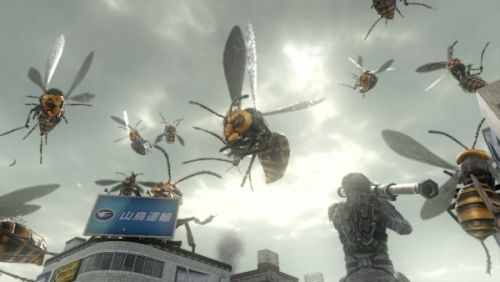 Sandlot’s upcoming third-person shooter, Earth Defense Force 2025, will have many beastly bugs to contest with, but do the humans have what it takes to compete? These screenshots may seem to be taking their side, actually.

As we wait for the impending announcement of a release date, tons of new Earth Defense Force 2025 screenshots emerge from the depths of the earth. With troves and troves of giant insects to battle against, what more could we possibly want for a future title?

Most of the pictures feature humongous, killer bees, ferocious red ants, and some pretty impressive looking Hector’s bubble shields for massive defense against them. Does the human resistance even stand a chance against them? Luckily for us, they do! Just to let everyone know, the gallery below doesn’t even showcase half of the ones provided to the community. Anyone interested in viewing the entire album of 116 Earth Defense Force 2025 pictures should head over here to Gematsu right now and check them all out.

Earth Defense Force 2025 is scheduled for release sometime in 2013 and will support 4-player online co-op action.