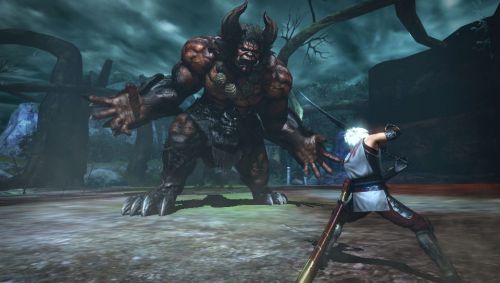 There seems to be a trend these days in the handheld scene. It involves teaming up with buddies to take down large monsters in epic fashion. With the release of Monster Hunter 3 Ultimate coming next month, and Soul Sacrifice not long after, the tradition is running strong. I'm not complaining, it means more cooperative action for fans of the genre to be a part of.

Enter the next big monster hunting game for the Playstation Vita. The game is called Toukiden and it will be released by Omega Force, a subsidiary of Koei best known for their wildly successful Dynasty Warriors series. The specifics of Toukiden remain relatively unknown. If we can expect anything from Omega Force and Koei, we can expect heavy emphasis on hack n' slash' gameplay with lots of action to be had.

A new video surfaced for Toukiden and from the from the looks of it, the game will involve the patented Dynasty Warriors action combined with monster hunting cooperative play. It is definitely something to keep on your gaming radar. The future looks bright for those of us who like a good old fashioned cooperative monster stomp.

The interesting thing about Toukiden is that it will be released for both the Playstation PSP and the Vita. It will feature cross system support, so players can join forces from different handhelds. The PSP version also supports Adhoc play.

Japanese players can look for Toukiden in the summer, with a demo coming to the PSN in April. As of now, there is no information given on a US release. Until we hear more, feast your eyes on the latest trailer.