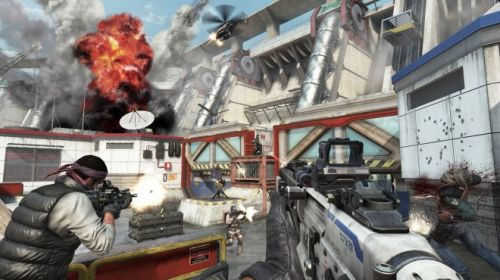 An image recently leaked of what could have been the next DLC in the Call of Duty: Black Ops 2 add-on’s. However, it has been confirmed that the image is a complete fake.

Treyarch hasn’t officially stated anything regarding the contents of the next DLC, thus the community wasn’t sure if the image could’ve been leaked to the public early. However, the same source that leaked the first DLC, “Revolution”, also leaked this one as well, almost trying to build a track record of insider scoop. Calling itself “Orientation”, the community was abuzz if this DLC promotion was real or fake. From the picture itself, the DLC would have contained another Zombies map called “Dead High”, a second DLC weapon (name is conveniently cut off), and four multiplayer maps: “Water”, “Southpaw”, “Mobile”, and “Plane”. Luckily for us, it was discovered to be a fake by community member named “Wolf”. Apparently, the images seen in the photograph were completely ripped from the promotional material of Call of Duty Online, the free-to-play version of Call of Duty for Chinese audiences. All the soldiers found in the pictures of the maps have been reversed to make them look original, but were actually taken from official Call of Duty Online wallpapers seen below. Sorry folks! Again, still no word from Treyarch about the second DLC, but hopefully soon. Xbox 360 players: keep on playing “Revolution” and tell us what you think of it. PC and PS3 players: look out for the DLC to come your way next week!