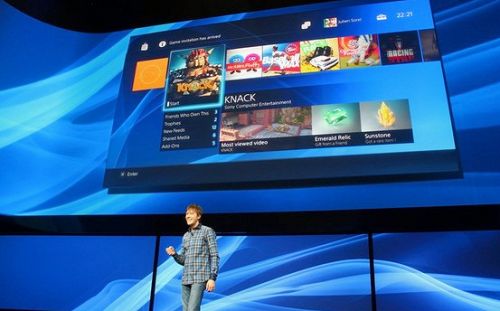 Sony officially unveiled the PlayStation 4 yesterday at an event in NYC.  While the actual console wasn't on display, we did get to see the brand new Dual Shock 4 controller, plenty of games, and a look at a brand new interface and infrastructure that focuses on video streaming technologies and social interactions.

While we didn't see WHAT the system would look like, we did see what would be underneath its hood.  It's impressive to say the least, and a bit surprising.  The console is essentially a PC, running on x86 architecture, which has been at the core of personal computers for 30 years.  What this potentially means is a much easier development cycle for games and a lot less of a learning curve.  Sony directly addressed their development tools many times over, afterall this has been an area of contention for over 10 years for Sony.  Over and over we heard developers talking about the "ease of use" of the tools.  There was even talk of being a more open platform for indie developers and at one point they brought Braid creator Jonathan Blow on stage to talk about his game The Witness. The PlayStation 4 will feature a Blu-Ray drive once again as well as a standard hard drive.  We also got confirmation the system will NOT be blocking used games in anyway.  Sony did confirm no backwards compatibility, though they are hoping to use the Gakai streaming video service to remedy this in the future.  They also confirmed that PSN and saved games will not transfer over either. The Dual Shock controller has gotten a slight redesign.  The analog sticks are concave instead of convex, the triggers look changed, and the overall shape is a bit bulkier. There's also a touchpad in the middle of the device that looks similar to the rear touchpad on a Vita, there's an illumination bar on the top that looks similar to the PlayStation Move's glowing orb, and there's a "Share" button that allows you to share videos and pictures at any time while playing a game.  The controller also sports a headphone jack which hopefully means that'll be a peripheral that comes standard with the system.

Sony also revealed a Kinect like stereo camera, the next "PlayStation Eye" as they called it that'll work in conjunction with the controller. While there was some gameplay shown, we didn't see much.  And what we did see didn't feel like a big leap.  There was a game called Knack which featured cartoon style graphics, a co-op racing game called Drive Club, though it was light on gameplay.  There was a new Killzone game announced, called Killzone: Shadowfall which looked impressive, but nothing mind blowing.  From third party partners we saw a new Infamous, Watch Dogs, and Bungie's Destiny.  The most impressive demo was what looks like a sequel to Dragon's Dogma from Capcom - it showcased some really impressive visuals and fire effect and some realtime combat against a dragon.  It truly was the only thing that "looked" next-gen.  Don't get me wrong, Killzone was impressive, but the actual gameplay of it left something to be desired.

The big news was Blizzard returning to the consoles with Diablo 3, something that's been rumored for quite some time. They confirmed both a PlayStation 3 and PlayStation 4 version of the game and even dropped a bombshell - 4 player couch co-op support.


Trailer for "Deep Down" from Capcom

The Philosphy, The Interface

To me this is where Sony stood out. Their focus is clearly on shared experiences with friends. At anytime you'll be able to view what a friend is playing, even "look over their shoulder" and help them out thanks to streaming technologies provided by Gakai.  Demo's of games will also use this technology, it sounds like you'll even be able to try before you buy on certain things.  Sharing videos and screens with friends on the consoles in a social network on the PSN seems to be a big focus as well.  Sony clearly wants it to be all about the gamer.

Of course all of this stuff isn't cheap.  Streaming technology, bandwidth, file and video sharing is all expensive to move around and you have to wonder if it'll be free or stuff Sony includes with a PlayStation Plus style subscription.

The entire conference took almost two hours.  It was packed with lots of philosophy, design details, and even games. Sony didn't reveal a price, the console itself, or a hard release date - but they did confirm the PlayStation 4 would be out in 2013. Expect a full reveal of the console at E3 in June of this year, Co-Optimus will be there to bring you the details.