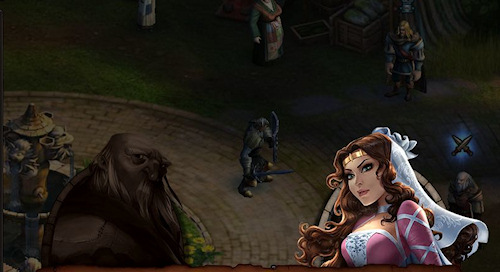 It was a little over a month ago I gave some impressions of KingsRoad - a free to play game from Rumble Entertainment that's playable through Facebook or Rumble's own online service. The browser based game is an action-rpg in the same vane as Diablo or Torchlight but is designed to be played in shorter sessions. Since last month, the team has added a new class, the Wizard, and made several enhancements to the game world. Today the game is available for anyone to try - though it's still technically in beta - and the team is treating it as a KingsRoad's coming out party. While my previous experience was with the Knight class, I gave the recent Wizard addition a spin. You can unlock either the Wizard or the Archer once you've accumulated enough gold. Each class has their own strengths and weaknesses - but for co-op players, there's a big advantage to having one of each in your party. Class specific buffs affect the entire team - so while the Knight was focused on damage and defense the Wizard is all about experience, gold, and item and mana buffs.

I played quite a bit solo with the Wizard and also tried my hand at co-op - and he works pretty well in both situations. In solo play there's a defensive spell that casts an ice wall around you freezing enemies temporarily which helps for crowd control. In co-op it works well to just stay back and cast fireballs and enjoy the bonus experience and buffs of your team. Overall there are some nice improvements that I've seen. The map system has gotten a complete overhaul so you can now see the land as a whole and which missions are available. Missions can be replayed and, in doing so, you can earn bonus gems and experience for achieving certain levels of progress in them.  Other features have been added, too, like the ability to spend gems on times buffs, share loot between characters using a stash, and a major overhaul of the crafting interface.

Other areas in which you can spend gems include inventory size increase, stash size increase, player customization, and unlocking chests with rare items. Gems can be purchased for real cash or can be earned through gameplay. While it seems there's a lot more you can do with gems now, I don't necessarily feel like you'd miss anything if you didn't have enough.

All in all KingsRoad still impresses me with the quality and style of gameplay for a free to play browser title. It's a great distraction that can be played almost anywhere. There's a low barrier of entry and the fact that it supports three player online co-op with matchmaking is incredibly slick.