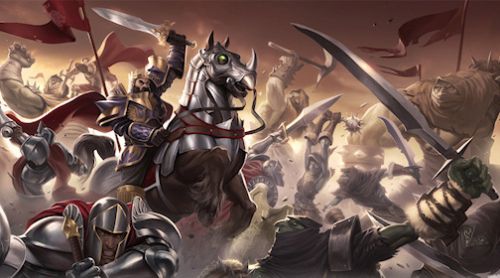 For hardcore gamers, Free To Play, has an almost negative stigma associated with it.  Combine that with the word "Facebook" and you're looking at the double whammy of disgust.  It's not hard to see why, with titles like Farmville begging for social sharing and clicks and other titles cheapening the experience by asking you to pay for gratification.  But there are some gems out there that are bucking the trend, the latest is a game from Rumble called KingsRoad - a hack and slash RPG that's playable via Facebook or Rumble's website.

We went hands on with the current Beta of KingsRoad and also talked with Brett Bates, Rumble's Customer Experience Manager.

In KingsRoad you choose from three classes of characters - The Knight, The Archer and The Wizard.  The Wizard is currently not available, but you can start with The Knight, who is a melee based character.  The story of the game takes place along a road - hence the name of the game.  You'll start in a small town where you can gather supplies, purchase or craft weapons, progress the story and gain quests.  You can also party up with two additional players for three player online co-op.  The slick thing is, since the game is tied to Facebook, your friends list is automatically populated with folks who are playing the game. Visually KingsRoad immediately impressed me.  It's a beautiful mix of 3D and 2D with colorful art, slick animations, and plenty of character.  "Between Flash 11 allowing for 3D and development kits like Unity, you can pull off really beautiful 'gamer's games' in browser now," said Brett Bates.  And he's right, the quality and look of the game could easily be mistaken for a retail product.  But there's no installing and very little waiting to play - loading the game took 10-15 seconds.  Rumble is fully aware of the Facebook stigma I talked about before and they really think their product will speak for itself and help break that.

Missions in KingsRoad are pretty straight forward, kill a bunch of dudes along the way to a boss battle.  Each mission takes 5-10 minutes to complete and you'll be rewarded with gold, gems and experience.  Missions can be replayed at anytime and replayed at higher difficulties for better rewards and XP. Loot plays a huge part in the game with a full set of pickups including all pieces of armor, shields, swords, charms, jewelry, etc.  And like other Action/RPGs each item has different attributes and bonus attributes.  The game also relies heavily on food and potions to keep your character alive.  Potions will immediately heal or recharge your magic while food does this more slowly and does it over time.  There's a full crafting mechanic for both weapons, armor as well as potions and food items.

KingsRoad has clearly been designed around co-op play, and up to three players can take on quests together.  All of the character's passive abilities also double as group abilities, furthering the push towards cooperative play.  For instance my Knight has a damage boost that affects the entire party if they are close enough.  The Archer has a passive critical hit buff giving everyone a greater chance for a critical blow against the enemy.  The game also promotes a friendly co-op atmosphere by making drops instanced  to each player, including those unlocked from special chests that require gems to open.  This means no loot stealing and more loot for everyone. The game is governed by gold and gems.  Gold is more easily attainable and is used to purchase core elements within the game - food, armor, weapons, etc.  Gems on the other hand are much more rare - they can only be earned by completing quests or by using real money to purchase.  Gems are used for things like unlocking special loot chests, purchasing potions, and customizing the look of your character.  For instance you can buy a set of shiny Gold armor with gems.  It's entirely optional, but some folks might want to do set themselves apart.  Being a social game, we can see the draw.

There's definitely trade off scenarios where you can use gems as a shortcut to get to certain things if you don't have the required gold, so you can see where Rumble is hoping some players will bite.  I personally never felt I HAD to use gems other than to get in some special chests, but the gems I earned just from playing felt more than enough.

Overall KingsRoad should really impress folks familiar with games like Torchlight 2.  There's a good chunk of content available already, but Brett told us it's really only the "first chapter."  The team plans consistent content updates to further the story as well as adding additional characters after the initial three.  The technology for the game is definitely impressive, at one point Brett was dropped from the game, but after reloading his browser he automatically joined the party again and was right back in the quest.  Some full retail titles can't even claim to do that.

KingsRoad should be available soon via Facebook and Rumble.