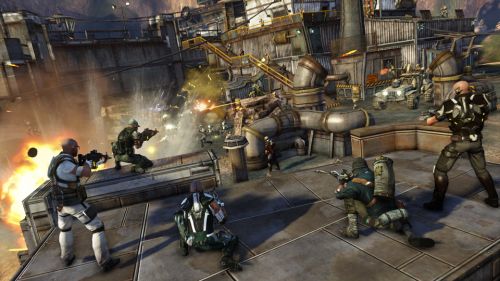 Did you hear? The good folks at Trion Worlds will be conducting another beta event for the upcoming MMO shooter, Defiance. Judging from the Co-Optimus community's response to our beta key giveaway, plenty of  you want in on the action.

This is actually the third Defiance beta, dubbed "Advance Mission Beta 3." Prospective Ark Hunters will be able to play cooperative and multiplayer game modes. Players will have access to the Mt. Tam and Madera regions, which jives with the whole California theme. Co-op players will be able to team up on Angel Island and Cronkhite Bunker. PvPers will duke it out at the Observatory and the Freight Yard. Sweet. Looks like we'll be battling all across the the Bay Area.

We'll be selecting the winners from our console beta key giveaway tomorrow. Nick tells me we still have some PC codes left, so claim them now while they are still available. You can also guarantee yourself a spot in the beta by preordering Defiance. Not only that, you'll also receive the Outlander outfit, a three day experience boost, the "Iron Demon" title, access to a red Dodge Challenger, and more. The Dodge Challenger will be available for use in the beta at a test drive challenge located in the Madera region. Product placement at it's finest! Seriously, it's the fastest vehicle in the game. You might want to check it out.

The PC, Xbox 360, and PlayStation 3 platforms will be supported in this event, but each system has a separate time frame:

Defiance will launch on the Xbox 360, PlayStation 3, and PC on April 2nd.