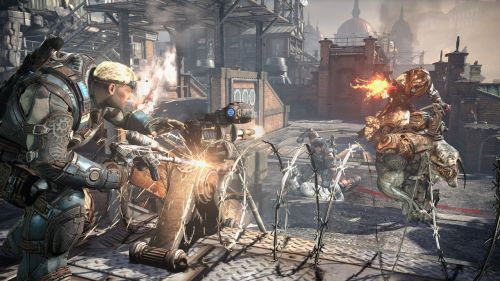 This week has a lot of potential on the co-op front. 360 owners will get another chapter of the Gears franchise. Capcom will once again try to convince Americans the Monster Hunter series is worth our time. PC gamers will get access to Resident Evil 6, whether they like it or not. And PS3 fans will get... well, you got God of War: Ascension last week. Go play that some more.

Gears of War: Judgment (360) The last installment of Gears for this console generation shifts the focus to Baird and Cole Train. It still has chainsaw bayonets, so it's all good.  2 player local co-op, 4 player online co-op

Monster Hunter 3 Ultimate (WIIU,3DS) Grab some friends, kill some monsters, and gut them for their parts so that you can make cool new weapons and armor. The monsters, not your friends. 4 player local co-op, 4 player online co-op

Resident Evil 6 (PC) RE6 has finally made its way to PC. Maybe I'll dig through my back log, find my unopened copy, and give it a chance. Then again, maybe not. 2 player online co-op

Below you will find Amazon links for the retail releases of the week. As always, if we missed anything, let us know in the comments section.