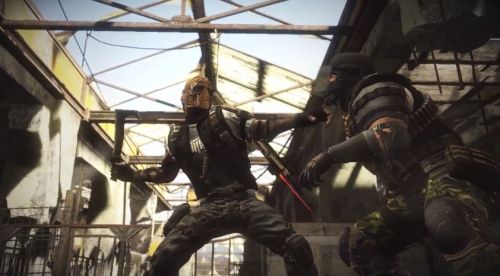 Army of Two: The Devil's Cartel is out next week on Xbox 360 and PlayStation 3. I know, it snuck up on me too. If you were looking forward to this bromantic action game filled with explosions, bullets, explosions, and oversized blades (seen above) - well that time is almost here.

EA has sent over a new trailer for the game chocked full of explosions and promotional quotes from the game.  We revealed some hands on impressions ourselves a few weeks back - let's see if I can find some good quotes to pull from it.

... John Woo flies in on white doves raining down destruction on everything...

...over the top gunfights to tense action..

See!  I can pull out of context quotes and make things sound awesome too. Don't worry - what I played of the game was fun, especially if you liked the previous titles.

Army of Two: The Devil's Cartel is out on March 26th with two player local or online co-op on the Xbox 360 and PlayStation 3.