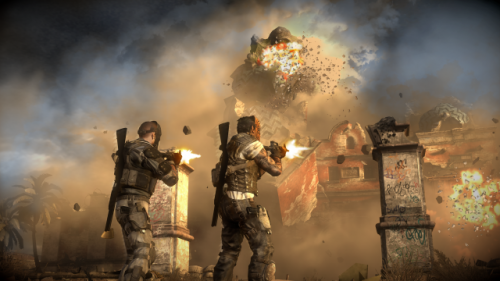 Army of Two: The Devil's Cartel will launch on March 26 next year. The cooperative military shooter will also feature some nifty pre-order bonuses. Those of you who pre-order the game will receive the "Overkill Edition." This will grant you access to more missions, weapons, outfits, and masks.

One of these new weapons is the TAH-9 machine pistol, which you can see in a video after the break. I've also included a video featuring 12 minutes of gameplay footage, because why not? You can read up on more details for the "Overkill Edition" following the videos.

Did they just shoot down a building? What is this, EDF? I approve.

Army of Two: The Devil's Cartel features two player local co-op and two player online co-op. It will launch on March 26 on the Xbox 360 and PlayStation 3.