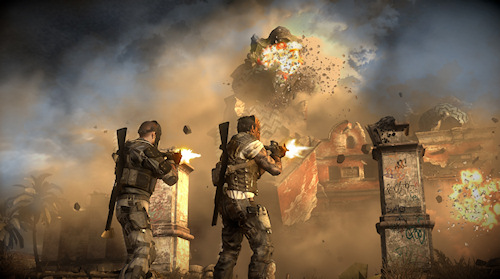 While the previous bromance is over, there's a new one brewing in Army of Two: The Devil's Cartel.  At the heart of it all appears to be some gorgeous environments just ripe to be exploded into tiny bits of debris and dust.

The latest Army of Two game is set to be released early next year, showcasing two new heroes at the center and a promised more serious tone.  The Xbox 360 and PlayStation 3 game brings a renewed focus on co-op play, dropping any form of competitive multiplayer all together to make the cooperative experience that much tighter.

We've got a handful of screenshots leaked from website All Games Beta showing some impressive looking visuals.  Bullshots or not, there's going to be a lot of things blowing up when Army of Two: The Devil's Cartel hits in March.