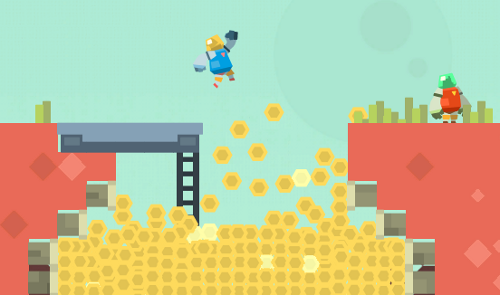 Developer Q-Games has done a lot of really great things with the PixelJunk series. Representing every genre from shooter to tower defense to simulation, each release has hit the fun spot right in the core, with plenty of lovely artwork and some great co-op experiences to boot. With Pixel Junk Inc., those convenient genre labels are thrown out the door. Instead, we get a healthy combination of PixelJunk Shooter, Terraria, PixelJunk Monsters, and, of all things, a soup-selling simulation!

Several members of the Q-Games team are currently working on Pixel Junk Inc., the official name for the game previously known as PixelJunk 1-6. Pixel Junk Inc. is a sidescrolling co-op game of laser melting, mining, robots, tubes, and, of all things, soup exporting. Each explorer has two types of lasers at their disposal: one that melts things, and one that creates things. The overreaching goal of the game is to build your factory and base, keep enemies at bay, grow and harvest plants, then turn everything you can into a sellable soup. Pipe the substance around the factory as you manage things like income and power supplies, all while running around a lovely 2D world with a bunch of other explorers.

Pixel Junk Inc. will support four player online co-op at launch, but the team is hopeful as many as 32 players will eventually be able to join in. An even more intriguing feature is that Pixel Junk Inc. is always on, meaning your little operation churns away while you're off doing other things. There's also talk of official modding support, which are the three sweetest words every little boy and girl gamer loves to hear.

Look for Pixel Junk Inc. later this year on Steam, with an alpha version available for purchase before the final release. Mac and Linux versions will eventually follow, and a console release isn't out of the question. See the PixelJunk Inc. FAQ for more info.