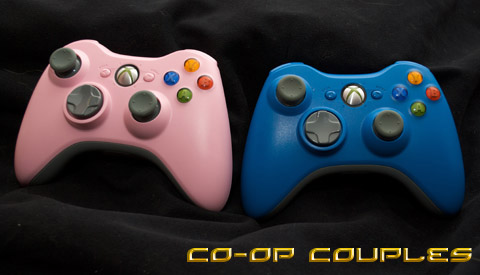 Welcome to our second part of our introduction to our Co-Op Couples series we are beginning here on Co-Optimus.com.  In the first part we looked at breaking down traditional barriers and overcoming any personal shortcomings that may happen.  Next we look at a few or our readers examples of how they got their significant other involved in their gaming habbits.  Above and beyond that, we look at how they began to play co-op games together.

The gaming hobby has been one traditionally dominated by males, at least from a stereotypical viewpoint.  There's a challenge that most guys always face when entering into a serious relationship, and that challenge is your girlfriend or wife's acceptance of your hobby.  The simple solution for this is simply to create a balance between your "together time" and your gaming time.  The more elegant solution though is to share this hobby together.  In the following article we'll talk about a few couples' experience with co-op gaming and how they introduced their significant other to it. Some of it may be a learning curve, some may be just the hesitation or uncertainty of not doing well in the game - but there always seems to be some small fear factor when introducing anyone to the world of video games.  I know from experience this is one of the reasons my wife is reluctant to play.  Something like this really rules out the idea of competitive multi player gaming and leaves you with only two options: story base single player games or cooperative multi player games.  Since this website is all about co-op, I think you know where this is going.  Even if the person you are playing with has never played a video game it's important to have patience.  There comes a point in playing where people suddenly "get it."  And if you can wait till that point it will become a rewarding experience for both players.

I took a ten minute snack break waiting for my wife to go up the spiral stairs on level 1 of The Last Crusade in Lego Indy.  She kept falling off the stairs.  She is pretty stubborn so she refused to drop out.  Eventually, those stairs were vanquished..... - Chris

Sometimes it's best to start off with a simple game, something like LEGO Indiana Jones or Marvel Ultimate Alliance.  These are games that anyone can enjoy and have different levels of complexity.  Your wife may not care about customizing her character in MUA and doing skill upgrades - but the game does a great job of taking care of that for you if you want it to.  Games that cater towards both audiences obviously are preferential.  Of course, it's not just about the game play options, a game needs a good story too.  Sometimes with a little luck (and a lot of love) your significant other can really surprise you.

Heather inducted herself into the Wife Hall of Fame when she bought a new 32" plasma screen HDTV and an Xbox 360 Pro with Call of Duty 4: Modern Warfare on the side. Wow! The Xbox was bundled with Forza Motorsports 2 and Marvel Ultimate Alliance, the latter of which Heather took a great interest in. For two weeks, sleep and food were out of the question; we HAD to beat this game. Heather is very story-oriented; she loves a good tale spin no matter how fantastical, so MUA was right up her alley. - Jim

The really great thing about co-op is it forces people to communicate.  And while some relationships might have problems talking about feelings and all that mushy stuff - a lot of people will find it much easier to talk about who to beat up on the screen or where to cover and shoot from.  The mushy stuff will come afterwords...well...maybe.  It's important for a game to cater towards your playing style as well.  Whether it's frequent save points, copious amounts of health, or a 3rd person camera - you need to find something that works for both players.

We played through Halo whenever we had the chance, and we both were enjoying it immensely. The biggest drawback we found with Halo was the lack of mid-mission saving, so we were eventually forced to find a more time-friendly alternative for when we only had 20-30 minutes of game time Not only did we enjoy Army of Two together, we almost enjoyed it even more. For myself, it was a nice change of pace from Halo, graphically and with controls. Obviously being a next gen game AoT had much better graphics, and I found the cover and control scheme much more in line with my preferred style of play, and Jenn found the light puzzle elements and stronger co-op features more appealing.
Army of Two is really a title that exemplifies how co-op games can build communication between a couple. The more that Jenn and I played, the more that we found ourselves falling into specific roles in the game. I was much more of a reckless run and gun player, while Jenn was much more controlled and able to snipe out enemies as they would catch me from behind. More often than not my foolhardy escapades would result in me getting "killed" which would require a quick rescue by Jenn, which she was able to do almost flawlessly. We were both a little sad when we finished Army of Two, but also a bit excited because it gave us an opportunity to find new challenges together.  - David
As you can see, anyone can enjoy the same games that you do.  Whether it's a hardcore shooter or an action rpg, there's plenty of games out there for you to try until you find one that works.  Sometimes...sometimes that person will surprise you.
After I picked up Gears of War and was finished with the single player campaign I decided to head on in to multi-player. I have played Halo 2 with my girlfriend before but I thought GOW might be a little graphic for her. So I fired up the multi-player mode and started in on some ranked matches. I proceeded to get my butt handed to me on a silver platter. I couldn't believe it, I mean I am not great at shooters but I am by no means terrible at them.  She is sitting on the couch playing her DS and looks up at me getting my butt kicked. She smarts off that she can do better then how I was performing. Well she had already had her own Xbox live account from playing Viva-Pinata. I explain the controls to her and say tells me she feel comfortable to play. Once we get her signed in, I decide that I should take us to the player match area so she won't get frustrated. Once we get in the game she end up having to be on the other team because of the amount of slots left open. I spent the next three matches eating shotgun blast to the face while she was giggling away. I quite humbling when she had not even touched the game before. -Kevin
Co-Op gaming can be a rewarding experience for anyone.  That act of working together for a common goal is some fantasy universe is always exhilarating; now add your partner in crime to the mix and it's double the fun.  Just remember to have patience, look for games that cater to common interests, and communicate.  Do you have a co-op experience with your significant other you'd like to share?  Let us know about it!