This month we're taking the PC version of Activision's Call of Duty: World at War for a spin on the PC.  We'll be playing the campaign mode in co-op as well as the ever popular Nazi Zombie mode!

To join up simply hop online on April 21st at 8PM Eastern.  Then check back to this page for server information on which servers we'll be playing on!

Look for the game called "CoOptimus" to join our crew! 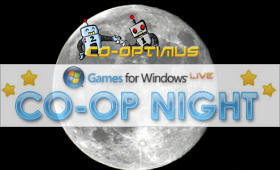 After completing single player you unlock a 4 player survival mode with Nazi zombies. Players are required to hold a structure by buying weapons, ammo, and fortifying the structure.  The latest patch allows instant access to this mode - so patch up!

Contest:  We're giving away 2 Func 1030 Gaming Mousepads courtesy of the Games for Windows team!  Simply reply to this thread to be entered to win.  Winners will be announced on Tuesday April 21st after the event!