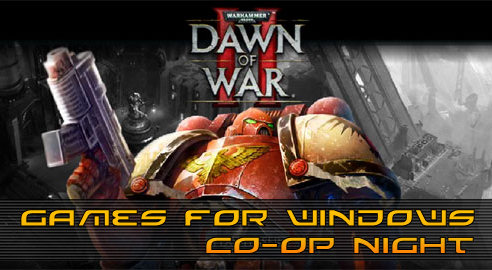 This month's Games for Windows Co-Op Night we go back to one of our favorites.  Dawn of War 2 from developer Relic is an Action/RTS that puts players in the role of gritty space marines as they take on three different aliens in an epic battle for survival.  The entire campaign is playable in co-op - and we have the perfect night to meet up with friends to do just that.

We'll be playing on May 26th at 8PM Eastern on Games for Windows Live. The Co-Op Experience:  Dawn of War 2 allows players to drop in and out of the hosts game, though they'll be required to start from the beginning of the mission.  Each player controls two squads of the four total.

Two player co-op is supported over Games for Windows Live.  While the host player saves all the progress, both players can unlock achievements.

Interesting Articles about Dawn of War 2:

For those of you looking for people to play - join our Steam Group.  That'll help you find people the fastest. Thanks to the fine folks at Relic and THQ we are giving away 13 prize packs, including 3 grand prizes.

What's up for grabs?

10 Prize Packs that include:

3 Grand Prize Packs that include:

To enter to win simply leave a comment here or join us for co-op night.  We'll announce the winners on May 27th!