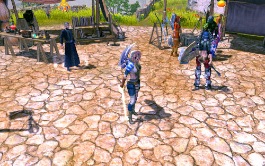 After the coverage began for Diablo 3 this year, my eyes began to focus more and more on Sacred 2.  I knew it was going to be some time before I got my fix of Blizzard's devil, and Sacred was considered to be one of the best "Diablo clones" back in the day.  But lets end the comparisons there, because Sacred 2: Fallen Angel does so much that it's actually closer to anMMO than your standard Action RPG.  Under every menu and every item you'll find another menu or item option buried there.  It's an incredibly deep and satisfying experience, especially when played in co-op.

The menu system is a bit confusing to start a co-op game, and we had some issues with firewalls and ports, but once we had a game of Sacred 2 up and running - joining a co-op quest was easy.  Depending on what gametype you choose, players can import their single player character into co-op, a great way to show off your hard work you did customizing your armor and weapons.  I strutted my Seraphim in her hooker boots and fluffy purple eskimo hat.  I figured I could use it to distract all the thieves and brigands I was going to be fighting. 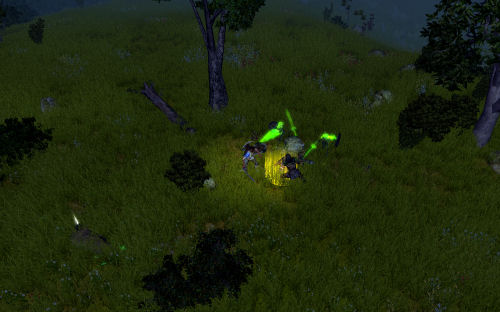 The first thing that will hit you is the fact that you can basically go anywhere and do anything.  There's no linear order here of quests, instead you can pick and choose as you go.  In co-op, only one player needs to obtain and complete the quest for the whole party to get credit.  This can come in very handy as it's very easy to get separated from the party and find yourself a great distance away.  Luckily Sacred 2 offers one of the most beautiful and helpful in-game maps I've seen in quite some time.  It's also very daunting as you quickly realize just how huge this game is.  Portal and revive points cut down some travel time, but you'll find yourself treking over the gorgeous terrain most of the time.

Players choose from six character classes; the Dryad, Seraphim, High Elf, Inquisitor, Temple Guardian and Shadow Warrior.  The Seraphim follows the Light campaign while the Inquisitor follows the Shadow campaign.  The rest can choose either or.  This can create a nice balance in co-op play, but can cause hindrance depending on the path chosen for the session.  As with anyRPG , certain classes tend to be better at different attack styles.  Despite that, the in game leveling and trait system really allows you to take a character anyway you wish, and it'll be quite rare to have two players playing the exact sameSeraphim or Dryad build for example.

Sacred 2 helps solve a lot of common problems with the point and click RPG experience.  You can easily pick up all items in your area with a quick tap of the Q button.  Not only that, your character will let you know audibly when you pick up a good item, no more wondering if your RustedChainMail of Mailing is any good or just a package for the closest vendor.  Players can also create "chains" of special moves and assign them to your secondary attack button, unleashing skill after skill of your choosing.  Combine this with your "God Power" and there's simply endless amounts of abilities you can do, and when in co-op, your screen will look like a Fourth of July fireworks spectacular as everyone goes to down on a swarm of helpless Kobolds. 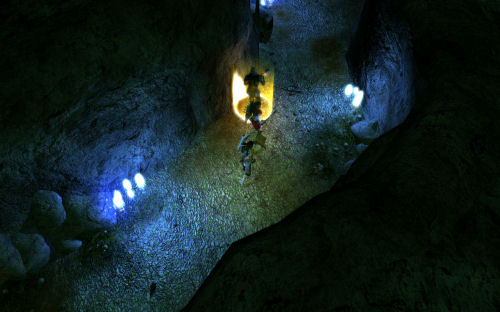 All in all Sacred 2 is a gorgeous Action RPG that stands in it's own right.  Co-Op works well with with the four player co-op campaign mode, and you'll find yourself in plenty of those "had to be there moments."  There are some issues with the interface, not only for starting a game, but for basic things like item trading.  These are minor in the grander scheme of things.  Sacred 2 should satisfy any MMORPG urges you have, without having to pay any monthly fees.